In a music website, there are artists and regular users as critics. While the artists launch and share their original music songs through their profiles,  all the other regular users enjoy finding and listening to the songs, and interacting with the platform in many different ways such as saving, spotlighting music, rating, commenting, sharing, and following artists of interest. Moreover, one user may also follow another user(s), if he/she finds out that the other user always finds and shares music that are similar to their taste. These elements make up a dynamic and changing online community of music publishing, listening, sharing, and rating, etc., or a so called "social network."

In this music-oriented ecosystem, how can we build an efficient network model such that all the aforementioned various user behaviors can be well captured, such that, for marketing purposes, valuable information may be properly derived? Specifically, for a certain specified artist, can we find out the top influential users from his/her fan network? Can we identify who his/her true fans are? Also, of the social networks users, who of them are the most active users by themselves?

These are the specific questions/tasks we received from a music tech startup company, which become the very problems/goals of this team capstone project. Moreover, of particular emphasis/challenge is to make use of the available data as much as possible and derive accurate and practically reliable/usable insight information, while at the same time, the involved algorithm is readily scalable to accommodate more user behavior variables in the future.

To build the desired social network, we need to take into account various kinds of user behavior information, including following and rating to artists, saving, spotlighting and listening of songs of an artist, etc. We count and convert all the available user behavior data into different feature variables, which will then be used to calculate an overall user-to-artist fan-score. The fan-score accurately represents/defines the relationship from a certain user to an artist (or to another user, in the case of one user following another user). Based on that, a social network graph can be accordingly derived.

To measure the activeness of an individual user, we take into account the total number of user activities on the website, along with some other specific user activities e.g. sharing and commenting, etc.

For each user behavior feature variable, we intend to calculate a score, of the same consistent range from 0 to 100. In order to do that, we need to conduct some preprocessing on the various different feature variables.

First, all of these behavior variables are different kinds of activity count. We normalize all of them with their respective measuring period of time in terms of the number of months. As such, each activity variable becomes a certain number of "count per month", which is very straightforward to interpret and control.

After time normalization, we identify some certain user behavior variables of much larger variation ranges than the others, for which we apply log transformation to reduce their respective variation range to be similar as those of the others.

For the calculation of a user-to-artist fan score, in order to make it be easily scalable for many more user behaviour variables possibly added in the future, we design and apply exactly the same algorithm (but just with different parameter values) to calculate a score for each variable respectively. The scores are all of the same range, and thus, can be easily aggregated together via simple weighted averaging operation into one final overall integrated fan score. Similarly, we calculate an overall user activeness score.

The fan score calculation is based on the scores of a user's music listening and other artist-oriented behaviours like following, rating, listening, etc., while a user's activeness score is calculated more based on a user's overall website activity.

Given the fan score, we need to further detect whether a fan of a certain artist is a true fan or not. For that sake, we need to further consider what fan scores the certain fan user have toward the artists other than the concerned one. In case a fan shows strong interests to many other different artists at the same time, i.e. having high fan scores for multiple artists, that fan's true-fan-ship score should be somewhat adjusted to be lower than the original fan scores. In practice, we developed a simple and robust algorithm to conduct such adjustment properly.

With the user-to-artist fan score, we can build a social network of all the artists and regular users, and conduct proper analysis as needed. Herein, we use the NetworkX Python package for SNA. We built a directed graph with weighted edges between users and artists, where each edge starts from a user to an artist, and the weight of each edge is the related fan-score.

For the entire social network graph of all the users and artists of the music website, we tested and conducted user influence analysis in many different ways (i.e. with different influence scores/metrics) and thus, got an influence score for each user/artist. Specifically, we tested with 4 different influence scores: closeness centrality, betweenness centrality, Katz centrality (i.e. an extended version of eigenvector centrality), and the famous page-rank score. Finally, we chose to use just the single page-rank score as our default for now. Page-rank is a famous algorithm from Google, which has superior performance when measuring the importance/influence of different nodes in a directionally linked networks. An illustration graph of the algorithm is as shown below. 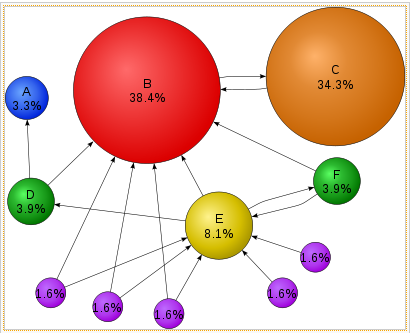 A demonstration of the entire network graph is provide as follows. Herein, the red nodes represent artists, while the blue nodes represent regular users. The edges represent the "following" relationship between a user and an artist, where a dark end/arrow indicates the outgoing direction. 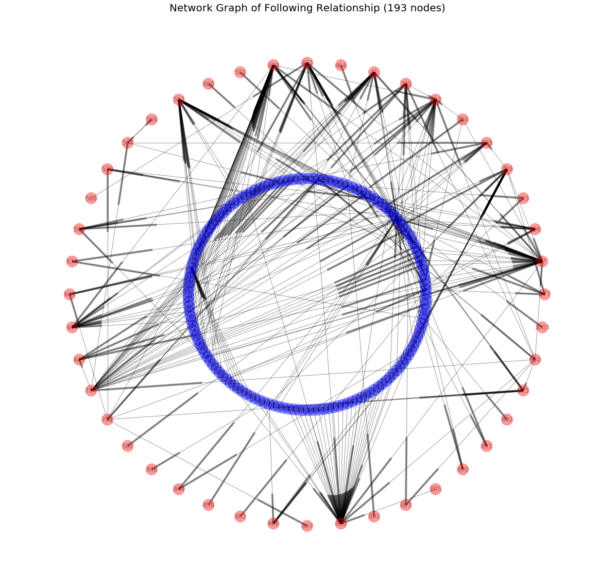 Given a certain specific artist, we can identify all the artist's directly and indirectly connected music fans (i.e. the so-called "ego network" with the concerned artist being the central or "ego" node). 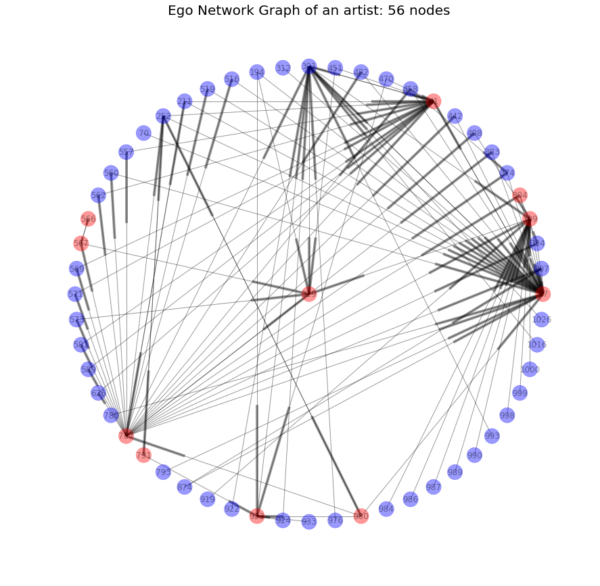 With all the above user scores and network works done, finally, we are able to give our answers to the targeted questions of the project.

Moreover, as mentioned earlier, the involved user score calculation algorithms are readily scalable when more variables may be added in the future.

One future direction is to add un-popular artist handling. We found that for artists that have no any or very few fans, we give no or very poor recommendation on their top influential users. In fact, it's better than nothing if we can find similar but more popular artists (e.g. of similar genre, and/or other music characteristics, etc), and return their top fan result instead, to serve as some more meaningful recommendations for the unpopular artist.

Another direction is that: besides the current top fan recommendations for the artists, a music or artist recommendation solution can be developed as well to better serve the use of regular users.

Thank you for the interest. 🙂

Hua attended 12-week data science bootcamp of NYCDSA, which is really a great and awesome experience. Thanks a lot!
View all posts by Hua Yang >

Yinan recieved his Bachelor's Degree in Accounting from Shanghai University of Finance & Economics and Master's Degree in Economics from USC. Before data science, he worked both as an Equity Analyst and Data Analyst for major financial institutions...
View all posts by Yinan Jiang >

Sal received his B.S. from Saint Peter's University in Jersey City, NJ with a major in Mathematics and a minor in Secondary Education. He worked for four years as an account manager and sales manager in the Interior...
View all posts by Sal Lascano >

View all posts by Weijie Deng >

Xiao received a MS degree in Biomedical Informatics from Nova Southeastern University in Florida. She was working as a data analyst at a healthcare IT company in Fort Lauderdale, where she developed her passion and got to know...
View all posts by Xiao Jia >

Shiva first got involved with Data Science through a Topological Data Science reading group. After six months of TDA studies, he realized there were fundamentals he'd yet to master, which is why he enrolled in NYCDSA. When not...
View all posts by Shiva Panicker >

Chima has a B.S. in physics and is currently studying Electrical Engineering at New York University. In undergrad he spent 2 years researching Fourier Optics in and Image processing. During this time he cultivated computer science skills to...
View all posts by chima okwuoha >

https://www.lovesbodybuilding.com August 17, 2019
It is really a great and useful piece of info. I am satisfied that you simply shared this useful information with us. Please stay us up to date like this. Thanks for sharing.

sheldon June 6, 2018
Great article. what software do you use to get those social network graphs?