What I Learned From Scraping Every Single ZocDoc Doctor

Internet start-ups have continuously replaced the herculean task of picking up the phone and calling an actual human with a few taps on the phone. Instead of calling a cab, you tap a button and one arrives. Instead of calling for late night pizza, tap a few times and the order is on its way. Founded in 2007, ZocDoc allows patients to avoid the horror of a phone call and book their doctors appointment with a few taps on their phone.

As a lazy millennial, I’ve always appreciated ZocDoc’s convenience and use it for the majority of my medical booking. ZocDoc allows me to book doctors based on other patient’s reviews, easily reschedule or cancel, and fill out forms beforehand by my appointment.

The Business of ZocDoc

Following the logic used here, given about 47k doctors on their site and ZocDoc's annual fee of (as of 2016)   $3000/year annual fee from doctors that use its service, we can roughly estimate their yearly revenue to be about 141 million/year. 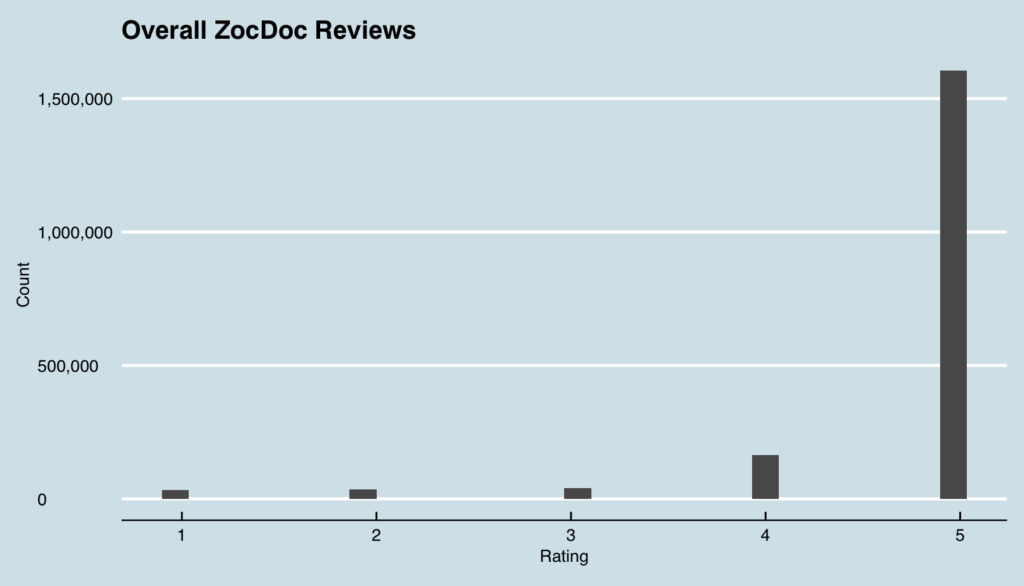 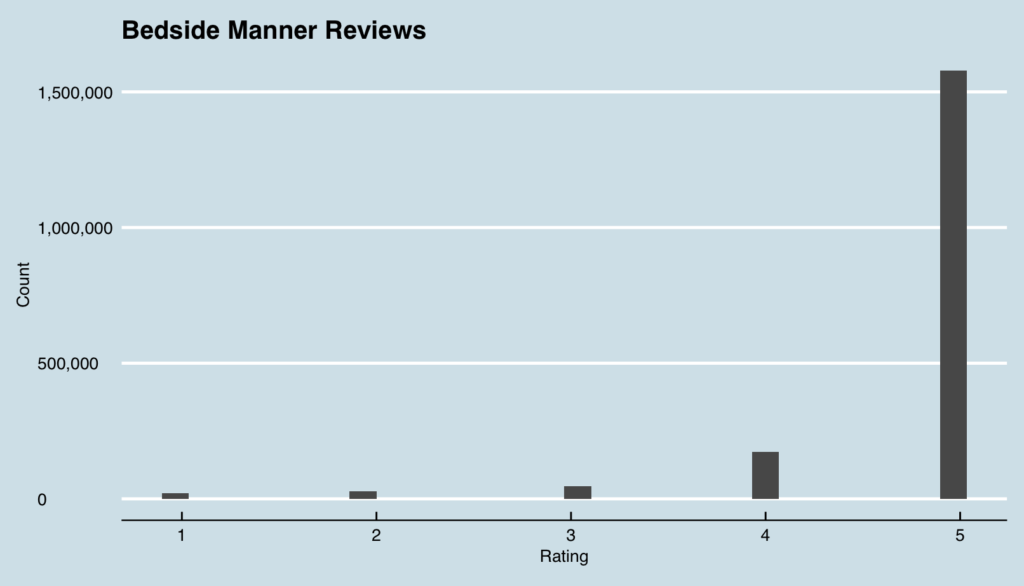 While still mostly positive, wait time reviews are a little less positive with more reviews under 5 relative to the other review categories. 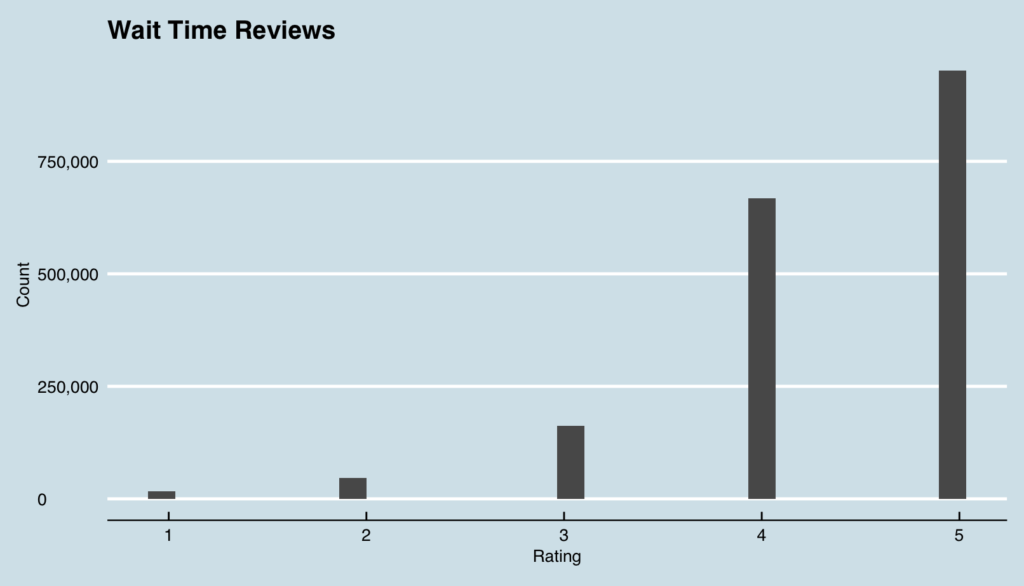 So ZocDoc's review system appears biased towards positive reviews. Why?

One explanation is ZocDoc patients are really happy with their Doctors. Patients have just given good reviews and that's that.

Another explanation could be their moderation policy. ZocDoc requires patients to visit a doctor in order to review the doctor and all reviews are moderated. They remove reviews if they contain profanity, personal information, pricing specifics, accuracy of treatment or diagnosis info, and promotional content. This moderation criteria — particularly profanity, pricing specifics, and accuracy of treatment — seems biased against negative reviews. If you swear at your overpriced doctor who misdiagnosed you, your review will not make it passed their moderation.

ZocDoc has a financial incentive to keep their reviews mostly positive. The doctors pay them to use ZocDoc. If a doctor gets mostly negative reviews, then they will be unhappy, not get patients through the service, and eventually leave.

What is in the reviews?

We can look at some of the most common bigrams, two-word combinations,  to identify patterns in the top five and one star reviews. These bigrams have been filtered for common words to reveal interesting words.

What are common bigrams in five-star reviews?

Below are some of the top bigrams. Patients like doctors who answer questions, take time, make them feel comfortable with friendly staff.

What are common bigrams in one-star reviews?

The following are the most common bigrams from one-star reviews. People seem to dislike doctors who keep them in waiting in wait room and waste time. Again, these top bigrams are most likely biased by ZocDoc's moderation policy which prohibits reviews that complain about price or accuracy of diagnosis.

Where Are ZocDoc Doctors Located?

ZocDoc was started and is headquartered in New York City.  So, not surprisingly, New York state is the home to the most ZocDoc doctors with 13,053 followed by Texas with 4,569 and California with 4,454. The top five states for ZocDoc doctors (New York, Texas, California, Florida, and New Jersey) account for 60% of the doctors on ZocDoc.

New York city,  Brooklyn, and the Bronx account for 15% of the doctors on Zocdoc. Other major cities include Chicago, Houston, and Washington D.C.

How Often Are ZocDoc Doctors Available?

On the night of Feb 11, I collected data on doctor availability for the next forty-five days  (which includes 32 weekdays) of all the doctors on ZocDoc. The median ZocDoc doctor has 107 appointment slots available in the next 45 days or about 2.3 a weekday. 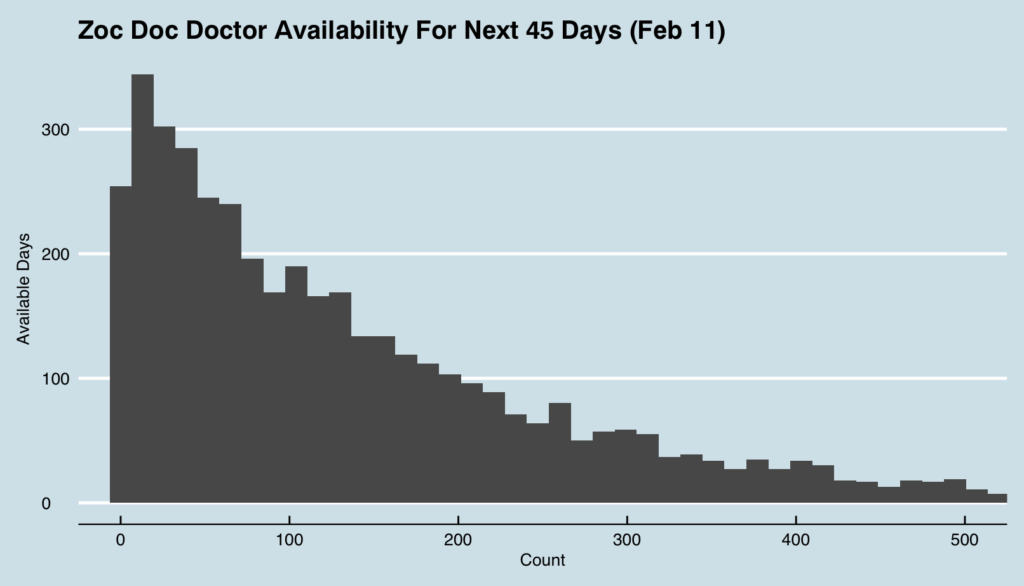 What types of doctors are on ZocDoc? 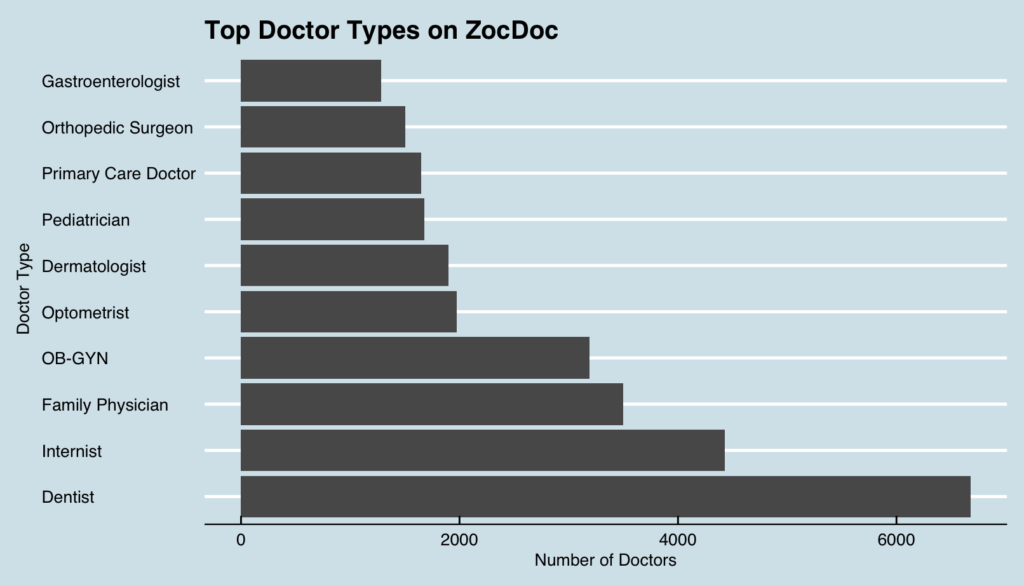 What Doctor Names Are Over-Represented By Doctors?

By comparing the first names of doctors against the most common U.S. baby names from 1951 to 1992 (25 yr old to 65 yr old, a rough range for when doctors were born) and filtering for first names with at least 20 doctors on ZocDoc , we see names that are more common with doctors vs  the general U.S. born population.  The top five names are Russian: Dmitry, Inna, Yelena, Alla, and Igor. Perhaps not popular baby names during the Cold War. 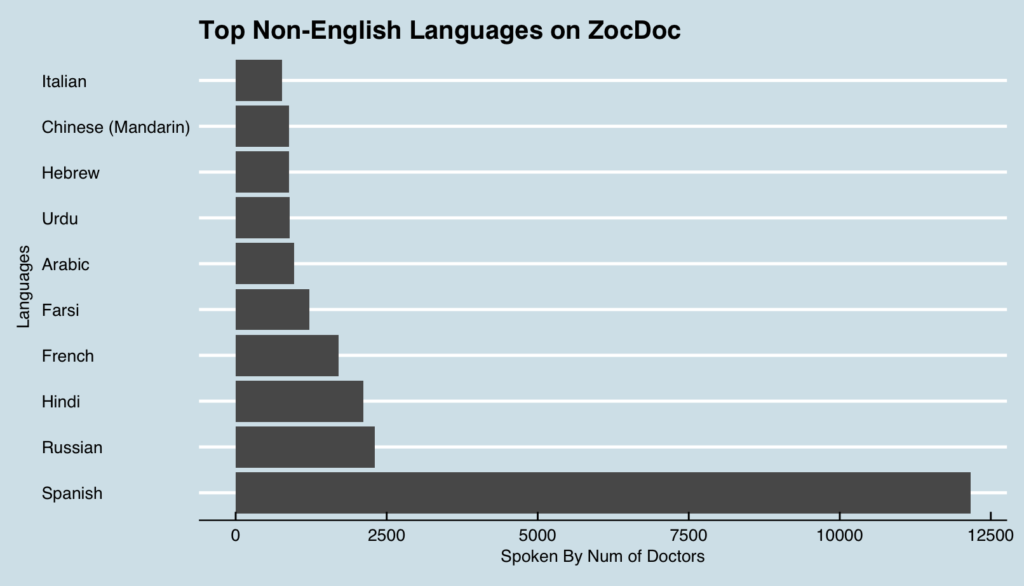 During the past eight years, I’ve worked as a full-stack developer, data analyst, and journalist. I’ve a track record of finding unique datasets through web scraping and using them to help companies solve key business problems. My NYCDSA...
View all posts by Jake Bialer >

CBD Oil For Dogs December 14, 2020
CBD Oil For Dogs [...]that would be the finish of this post. Right here youll come across some web pages that we feel youll enjoy, just click the links over[...]

MKsOrb August 26, 2020
MKsOrb [...]very couple of internet websites that come about to become detailed below, from our point of view are undoubtedly nicely really worth checking out[...]

onhaxx.me August 19, 2020
onhaxx.me [...]just beneath, are many entirely not associated websites to ours, however, they may be certainly really worth going over[...]

Google August 13, 2020
Google Here are some hyperlinks to sites that we link to because we assume they're really worth visiting.

cbd oil for cats July 9, 2020
cbd oil for cats [...]Wonderful story, reckoned we could combine several unrelated information, nonetheless truly worth taking a appear, whoa did a single learn about Mid East has got much more problerms also [...]

Larry Ding June 24, 2020
Fantastic analysis and it is really useful to me as I am building a competitor to ZocDoc and it's going to be only 99.99 a month.

CARL LONEY September 23, 2019
If you look at the reviews from vitals, healthgrades and google, the reviews often don't match with the data from zocdoc. The thing with zocdoc is, they are often flooded with fake positive reviews that people overlook the negative (real) ones. I was looking at 1 specific doctor today, and she was getting on avg of 2 star reviews on yelp, gugle, and healthgrades, while the had a 4.5 on zocdoc.

Taylor February 12, 2019
They absolutely scrub reviews. It's something like any review with a rating below 4 stars is automagically withheld. I think it's still possible to get it posted, but they require some additional verification, a phone interview, etc., a barrier large enough that a normal person doesn't bother with it.

Taylor Archibald February 12, 2019
They absolutely scrub reviews. It's something like any review with a rating below 4 stars is automagically withheld. I think it's still possible to get it posted, but they require some additional verification, a phone interview, etc., a barrier large enough that a normal person doesn't bother with it.

Notta Victim September 12, 2018
As a physician with an established busy practice, I chose to pass on ZocDoc when it was first pitched to me because it basically amounted to paying for referrals and because it prioritized patients who did not present from established referral sources and were likely to "no show". Of course, they stacked their site with fake positive reviews in order to keep the patients coming and to keep their customers happy. Many of my colleagues decided to go with ZocDoc and considered it a good deal for $300/mo initially, however over time they came to over rely on ZocDoc for all of their reception duties and are now crying uncle while ZocDoc attempts to convert them to a $35 per patient referral fee with charges taken even for no shows. I am glad I grew my practice organically and have never had to rely on a site like ZocDoc which requires kickbacks for referrals.

Geeta Poptani March 25, 2018
I am one of those people who has worked in their back end office and seen how it works. All reviews get to the site. On it the profanities and other stuff are removed. The rest is kept. Every patient who visits writes the reviews and those are typed out by the back end.

Steve October 20, 2017
I tried ZocDoc for a time. I am a gastroenterologist in Ilinois. I had 3 appointments scheduled over a year through the service, 2 didn't show, and 1 that came didn't need specialty services. Then Insaw that ZocDoc was putting a list of other physicians that the patient might want to see on the page that was my practice. So, lousy referral experience and the company advertised my competitors on the page that was supposed to drive patients to me. What were they thinking. You may be interested in the following. After a few months of no referrals I called to cancel. They offered to leave my profile up for free! Well, I continued that for another 6 months, but after about 9-12 months I decided they were a negative on my practice for he above reasons, so I demanded that they drop my name entirely. So, I suspect a lot of he doctors on the site are not paying for the service at all.