Scraping millions of reviews from Amazon.com

As part of a web scraping project I wanted to answer the following question: could I use the number of product reviews on Amazon.com as a proxy for product sales? Could I then analyze market share for the companies in a product category?

Scraping Amazon obviously comes with challenges. I had to modify my code several times before I was able to capture all of the reviews (99%+) in a given category. I used the following tools for my project:

I want to acknowledge Hartley Brody's amazing blog, where I found much inspiration for this project.

My code and notebook are accessible here.

I ended up scraping ~2 million reviews over 2 days. To verify I had retrieved everything, I compared the number of rows in my database with the number of reviews displayed by Amazon on the main product page. I scraped 99-100% of the reviews for many products, yet for others I only scraped ~50%. After investigation, it turns out that Amazon uses the sum of all reviews for the different models available (example here) meaning that I had indeed captured all the unique reviews. Although the practice of sharing reviews across models seems justified enough in some cases (e.g. same product but different codes if an extra cable is included), for others the products were quite different. Showing the sum of all reviews makes the individual products look more successful than they really are. In the categories I parsed, I found that ~20% of the reviews were used for the review counts of several products Note that the specific model being commented on is indicated in the detail review page.

There are obviously many things one can do with Amazon reviews. I will just give one example. Imagine that an investor's goal is to study the market share evolution of Zoom Telephonics (ticker: ZMTP) in the US cable modem market. In the spring of 2015, Zoom signed an exclusive license agreement with Motorola Mobility LLC for the Motorola brand (going into effect January 1st, 2016). The Motorola brand was licensed to Arris at the time. How would the market shares of Arris, Zoom Telephonics and the 2 other main players NetGear and TP-link shake up afterwards?

I plotted the number of reviews for the top modems (trailing 12 months): 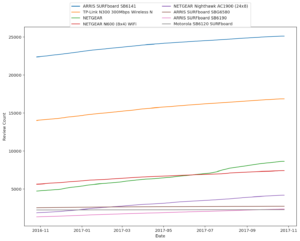 A couple of comments on this graph:

Note: Clearly there are many other factors influencing market share in addition to the number of reviews on Amazon.com, e.g. advertising or brick-and-mortar sales. Covering all of those is outside the scope of this document, but needs to be kept in mind when drawing conclusions.

To circumvent this problem I looked at the new generation of modems sporting the DOCSIS 3.1 norm. It provided a cleaner start as all major brands released new products in a short timeframe. 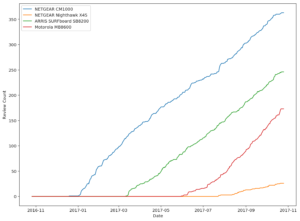 Here, the Motorola modem is indeed the one manufactured by Zoom. Despite a few months' delayed start, we can see that it is catching up in number of reviews. The tentative conclusion is that Zoom will grab a significant share of the cable modem market thanks to their Motorola licensing deal.

Note: This example is for illustration and not meant as investment advice.

Conclusion and Next Steps

Overall I have accomplished my initial goals for this project. Using the count of reviews to predict quarterly sales is best suited to situations where a company has a manageable number of SKUs. The mapping between company and products is not always consistent and needs monitoring. As we have seen sometimes the brand 'Motorola' is used instead of the manufacturer 'Zoom Telephonics'. Sometimes different names are used for the company or the field is blank.

Review counts are good to spot trends, using the rate of growth, but it is difficult to derive market share penetration from the absolute number of reviews. In the 18 months to mid-October 2017, Zoom Telephonics market share on Amazon.com grew from 3% to 27% while Arris' went from 57% to 38% but the number of reviews for Zoom's top cable modem is still a fraction of Arris' top one (700 to 25k).

No project is ever truly complete and I can think of many ways to improve the current version. One promising area would be to include the rating in the analysis, e.g. how does the rating explain subsequent review count growth?

Quentin holds a BS in Electrical Engineering with a minor in Computer Science from Telecom ParisTech in France.
View all posts by QUENTIN PICARD >

Daniel Armstrong July 4, 2018
I would first like to say I really enjoyed your post, and the comments in your code were extremely helpful in aiding in my understanding of how your project worked. I am wondering if you could help me understand the type of problems you were having with scrapy.proxies. What would you have done differently in your implementation? Do you have any tips for using scrapy.proxies?

QUENTIN PICARD February 5, 2018
Hi Marc, I didn't research tools such as proxycrawl as I wanted to keep full control for my project. I looked it up and found a few positive comments so I might try it in the future.

Marc February 4, 2018
Hey Quentin, you said that you used sharedproxy to get proxies, why didn't you use something like proxycrawl.com? In my experience is much better to use some kind of service like the one they provide than to handle your own proxies