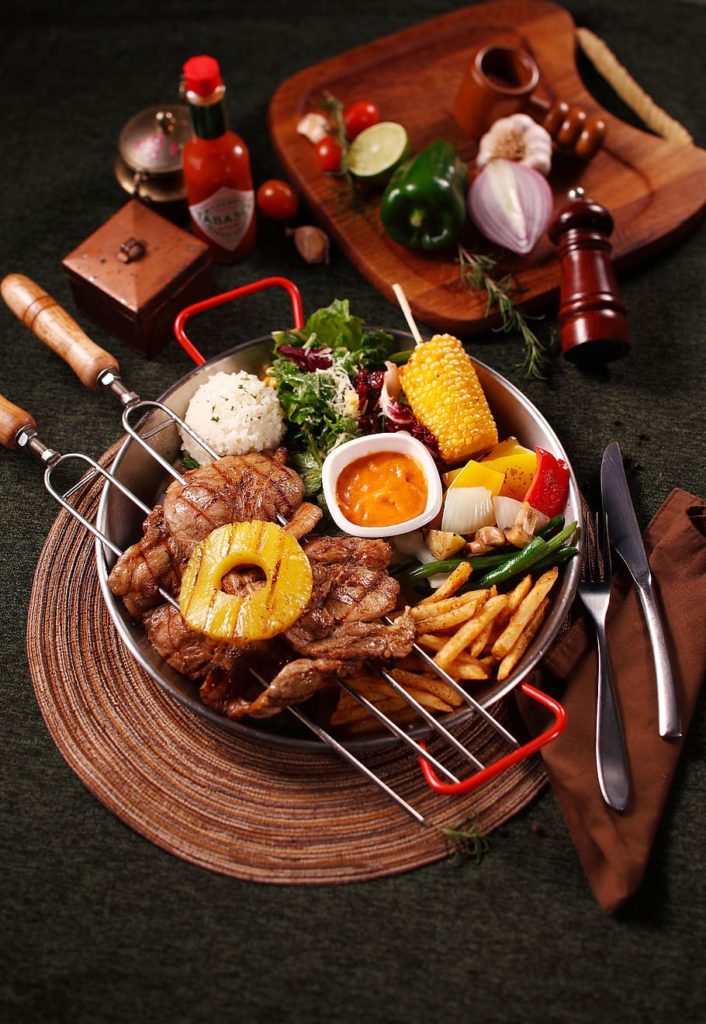 With the rich dataset gathered from the web scraping project, I decided to explore some of the features in the dataset and formulate a simple model to price restaurant sub-menus.  Due to the sheer size of the dataset(restaurant data for all cities in California consumed ~1/2 GB of my hard drive), I limited the work and analysis to cities in California. The analysis can be however extended to all cities in the US.

The basic question I seek to answer in this project is: Can I extract useful features from the UberEats site to create an accurate pricing model for sub-menus?

The shinyApp contains the visuals that were useful in the exploratory data analysis as well as a prototype of the pricing model and its performance on a toy menu uploaded for illustrative purposes.

The intended audience would be a restaurant owner looking to introduce a new sub-menu item in a particular location and who needs a good gauge as to how to competitively price their menu from comparables.

As mentioned in the intro, the analysis was limited to the state of California. Dataset included 357 cities and 28k+ unique restaurants.  Main features scraped from UberEats are :

Out of the 357 cities with a listed restaurant, Los Angeles was by far the most active city with ~4000 restaurants listed. Out of the ~24,000 sub-menus listed across the state, the most popular items were beverages(or soft drinks), sides, salads, desserts and sandwiches as shown below.

It can be seen from the above chart as well as the shinyApp that ~15% of the listed restaurants are found in Los Angeles alone. Still I wanted to explore the other cities and in particular the price distribution of their sub-menus. For this project, I limited the analysis to the top cities and top sub-menus as shown above.

After cutting off outliers and doing basic pre-processing of data to correct misspellings of sub-menu names and lump same sub-menu names with slight varying spellings together, I got the histograms and violin plots of prices for the sub-menus of the top 10 cities in California. The above is a snapshot for Los Angeles taken from the shinyApp with the drop down menu allowing users to select any of the other 9 cities used for this analysis.

Visually, same sub-menus showed similar price distributions across the cities. So I thought to myself, why not use the most actively listed city(Los Angeles) as the benchmark city and use the sub-menu prices in Los Angeles as the feature to predict like sub-menu prices in each of the other cities. That way we reduce the size of the data set drastically as we don't need to gather data from all cities to model sub-menu price ranges in each city.

So are prices really different?

As mentioned above, I ran 2-sample t-tests for all top 10 cities with Los Angeles as the control city.  Testing means of sub-menu prices in Los Angeles against itself served as a test of the analysis. We expect that the means of all sub-menus in Los Angeles with itself to be the same as shown in the graph below:

However the means of same sub-menu items are expected to vary across different cities:

While I thought geographical proximity to Los Angeles would determine whether average prices were statistically similar or not, this does not appear to be the case at least for the top 10 cities included in the analysis and would be an interesting topic to explore further. Nonetheless, the results identify which sub-menu prices need to be transformed and which do not in our sub-menu pricing model.

What are ratings worth?

At this point, I've identified one feature to use in the pricing model - the mean of sub-menu prices in LA and for the other cities - a flag to determine which sub-menu prices need to be transformed based on the sub-menu, city combination.

One other potential feature is the restaurant rating. Most restaurants are reviewed and rated online by their customers and given the focus given to this by the industry, I wanted to find out if there was any significant correlation between the ratings and menu prices. If there is then we can successfully incorporate ratings into our pricing model.

Running a simple linear regression of mean prices against ratings shows significant regression beta for some cities especially Los Angeles and across the top 10 cities as a whole at the 95% confidence level:

So the good news is that there appears to be a linear relationship between ratings and prices even if the R-squared for the top 10 cities as a whole is fairly low. Ratings then gets to be included as the second feature in our model.

What else can we add to the model that's available to us from the scraped data?

I wanted to find out if certain words or phrases were common in higher priced meal items. Consequently I created a word cloud on meal descriptions after removing stop words and punctuation. Unfortunately, words and phrases that dominated were related to "party size" items on the menu. What I needed to do was to normalize prices by quantity to deduce the unit price of each meal. I however do not have quantities in my scraped data and as such couldn't proceed further with this analysis. While keywords did not make it into the final pricing model, there's still information that can be gleaned from them. This warrants further investigation - something I intend to do using machine learning techniques as I pick them up along the course of this bootcamp. 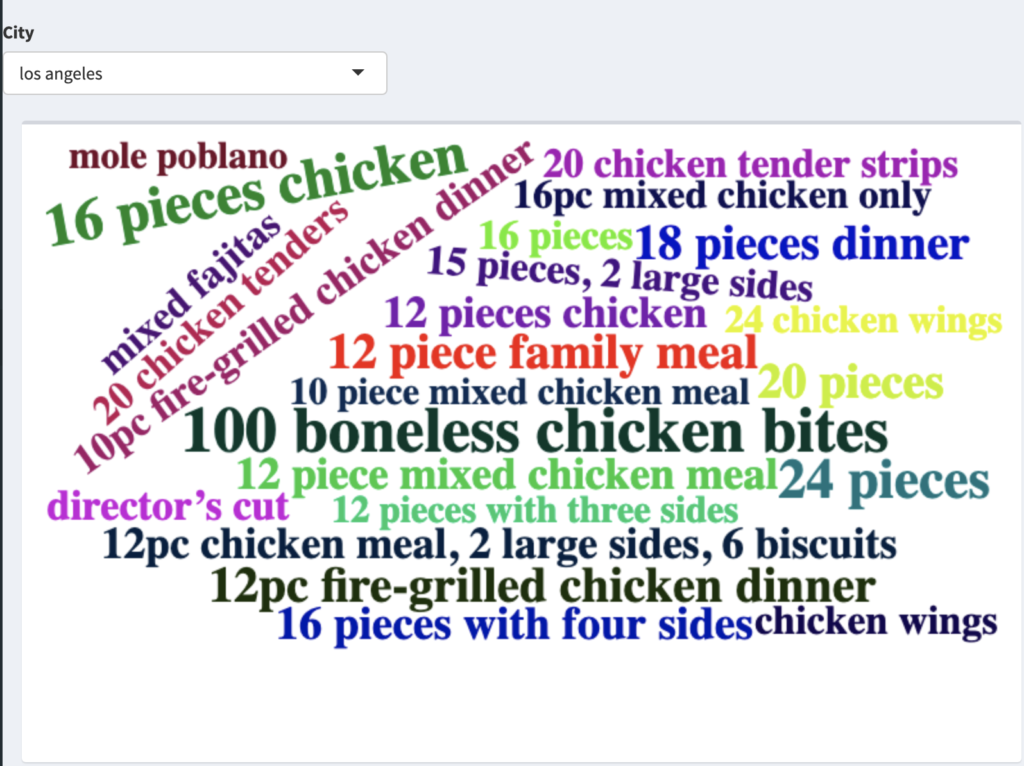 Can I price your menu?

With knowledge of the distribution of average sub-menu prices relative to their equivalents in Los Angeles and how menu prices on average vary with restaurant ratings I created a simple linear model that accepts as input a table of sub-menu items, restaurant rating and location and outputs a range of prices for each sub-menu item as a recommendation for a restaurant owner looking to price such menu items. Model results were compared visually to those from the actual price ranges for those sub-menu items and restaurant's location as shown below: 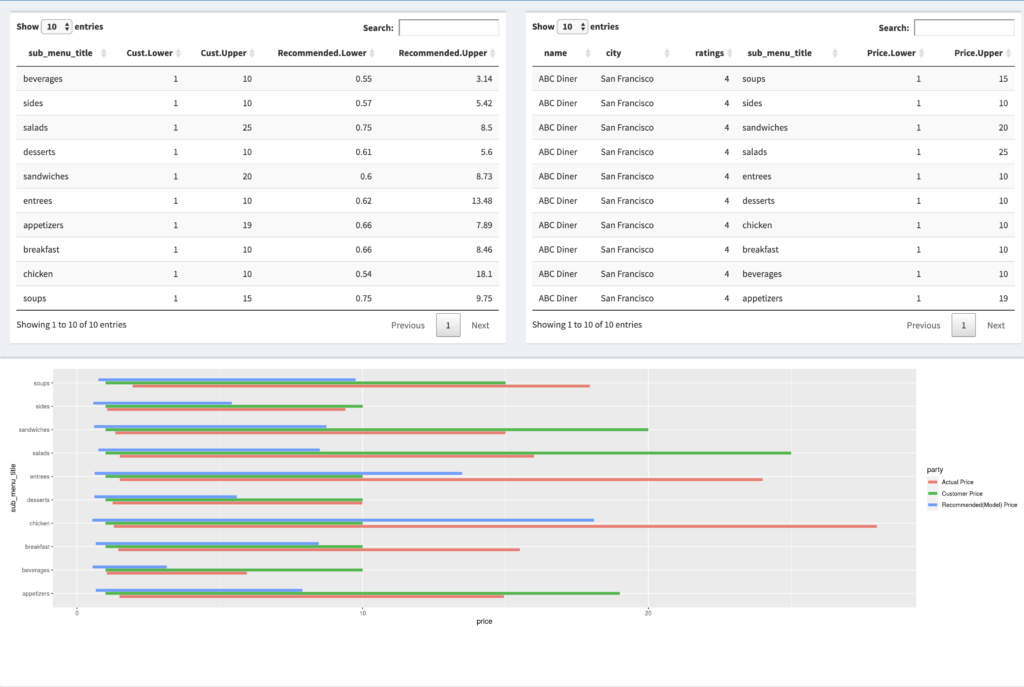 The simple model didn't perform too well especially when it comes to sub-menu items with significant skew different from that seen in the equivalent price series from Los Angeles. This was expected as pricing assumptions ignored variances and skewness and focused solely on the 1st moment of the price distributions: mean and hence didn't have enough information to accurately model the price ranges for each of these sub-menus when they differed significantly from their equivalents in Los Angeles. More generally, more features will need to introduced in this model to improve accuracy.

Coming back to my initial research question, there's isn't enough features from the scraped data to accurately price a restaurant's sub-menu item but this work serves as the building blocks for further more advanced work on this pricing topic. Further work will be heavy on feature generation and selection using sources outside uberEats' public website.  Features would then be fitted using multi-linear regression with penalization or non-linear regression techniques to ascertain the best pricing model given the data.

Financial services executive with extensive experience in trading and risk management of listed derivatives. Excited about opportunities to apply data science to the financial services domain and beyond!
View all posts by Robert Atuahene >