"Congratulations! You are enrolled at the New York Data Science Academy." I received my Enrollment Letter with a sense of excitement. Immediately, I jumped into action to sort out my maiden trip to the Big Apple.  Instinctively, I logged onto Airbnb, in search of an ideal accommodation. My excitement quickly turned into dismay. My screen was populated with a map full of listings. With a sense of despair I sought answers to these questions: Where is a decent and safe neighborhood to live in? Will the listings be convenient for my commute?

Since its inception in 2008, the rapid rise of Airbnb has dramatically expanded the use of traditional apartments as transient hotel rooms. By February 2017, it was valued at $30 billion, cementing its position as the poster child of the sharing economy.
In the United States, NYC is by far the largest market for Airbnb with over 41,000 listings comprising private rooms, entire homes, and shared rooms. In light of this, a detailed analysis of Airbnb NYC Data is invaluable as Airbnb Hosts jostle for a larger piece of the proverbial pie in this lucrative market. Understanding the Dynamics of Crimes, Subways, and Neighborhoods enables the Supplies (Hosts) to better meet the Demands (Users).

To facilitate my analysis, I incorporated 3 separate datasets, namely:

The resultant findings are showcased in a Shiny App .

First, each Airbnb & Crime Listings were grouped under their respective Neighborhoods based on Coordinates. Meanwhile, Crime Density was derived as Crime Counts per Neighborhood Area. They were binned into Crime Levels—Very Low, Low, Moderate, and High—based on Percentiles. Finally, each Airbnb Listing was paired with its nearest Subway Station and Haversine Distance.

The NYC Interactive map was developed to aid the user exploration experience and overall visualization. Some of its features are:

Every day, more than two million people use New York City’s mass transit system to get to Manhattan’s core. If New York City is the heart of the economy, its Subways are the main arteries. It is interesting to study the Distribution of Airbnb Listings with regards to Subway Locations. A Density Plot was produced for each Borough. It showed that 80% of listings fall within a 1000 m distance. An additional 10% of listings fall within the 1000–2000 m range. This shows the importance of Subway Proximity to Airbnb Listings. Between boroughs, Manhattan has the best Subway accessibility with a distance of less than 850 m among all its listings. This is followed by Brooklyn and Bronx (<1500 m) while Queens had a larger distribution spread (<5000 m).  Staten Island is not connected to the Subway grid and hence was excluded. 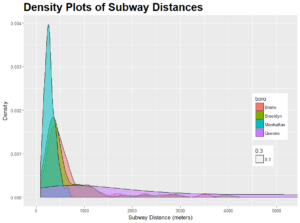 A Bubble Chart was instrumental in depicting the dynamics among the various factors. Manhattan with the largest bubble, had the most listings at 19,053 followed closely by Brooklyn with 17,215. Queens is a distant third with 3,922. Bronx and Staten Island only had 700 and 266 listings respectively. Manhattan, owing to its prime locality proved to be the most popular despite registering the highest crime rates. The Bronx seems to lag behind presumably from a less than desirable image of crime and poverty. Brooklyn holds its place in the Airbnb market with a good mix of low crime and good subway connectivity. While Queens has one of the lowest crime rates, it suffers marginally from Subway connectivity. Finally, Staten Island stand to lose out largely due to its lack of Subway accessibility. 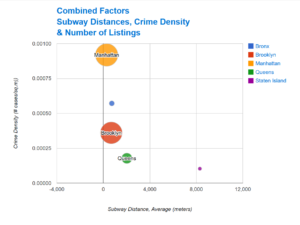 Thus far, the underlying framework of analysis has been developed and discussed. This, I believe, lays the foundation for even more groundbreaking insights to the travel and hospitality juggernaut of Airbnb. For future work, it will be interesting to apply this framework on other major cities like London, Paris, and Hong Kong. Many other factors have been earmarked for data integration including Demographics, Restaurants, and Entertainment Listings.

Chung Meng has a Masters in Electronics Engineering. He is forging a path in the exciting field of Data Science.
View all posts by Chung Meng Lim >