Crime, particularly violent crime, is always prevalent in the public consciousness. At the same time, the UN reported in 2014 that population densities and the prevalence of urban areas continue to increase, with more than half the world's population living in urban areas for the first time in history.

The relationship between crime rates and population density is unclear from an intuitive standpoint. It seems likely that crime rates increase as population densities increase. You don't shoot your neighbor in the country, right? But when you are traveling alone at night, having a higher population density makes it more likely to have people in the vicinity, which lowers your chances of being mugged. There tends to also be a stronger tax base, allowing for more police who simultaneously have less area to patrol. So which is it: do crime rates, which measure the number of incidents per 100,000 people, go up or down with increasing population density?

It turns out that the answer to this question is rather complex. Over the years population density has increased throughout the state, while crime rate has consistently gone down. Nevertheless, there continues to be a correlation between density and crime. How could this be? That is the question we will answer in this blog post by looking at publicly available data from New York State. 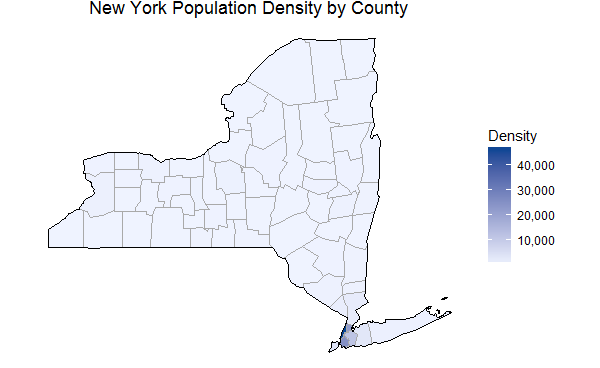 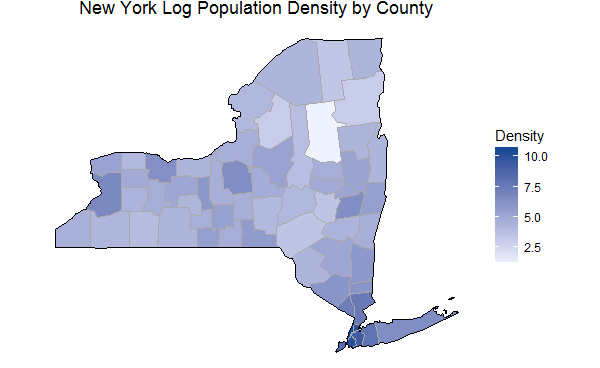 The NYC counties and the New York counties outside NYC will be investigated separately in light of the strong disparity of population densities and differing availability of data for NYC counties. The data was obtained through Data.gov and is published by the State of New York and maintained by OpenData NY. Click here for the dataset. For each county over the years of 1990-2015 it includes population and both the absolute number of crimes and crime rate (incidents per 100,000 people) for four types of crime metrics: index, property, violent, and firearm. These metrics are collected by the FBI through the National Uniform Crime Reporting Program (UCR).

As reported by Data.gov: "The UCR reporting system collects information on seven crimes classified as Index offenses which are most commonly used to gauge overall crime volume. The Index Rate includes the violent crimes of murder/non-negligent manslaughter, forcible rape, robbery, and aggravated assault; and the property crimes of burglary, larceny, and motor vehicle theft."

Information for the NYC counties of the Bronx, Kings, Manhattan, Queens and Richmond was only provided between 1990-2001, supporting the decision to investigate the NYC counties separately from the rest of New York counties.

Keep in mind the axes on the graphs above are different. Population density clearly increases over the timespan provided by the available data for both New York counties outside NYC as well as in NYC counties. The upward trend of population in New York State outside NYC, seen on the left, has continued steadily over the last 25 years with the exception of two spikes: one before the millennium and subsequent decrease in the following year, and one in 2010 with a subsequent increase. In NYC, the population density was flat with a sharp upward spike beginning in 1999, the same year a similar trend was seen in New York State outside NYC.

It turns out that New York City was also a beneficiary of decreasing crime rates over the 11-year period for which data was reported in this dataset. The index rate fell more than 1/2 over the 1990's alone, indicating that factors outside of population density, which increased over the same period, have a strong impact on crime rates. As a percentage, the crime rates in NYC decreased more than those in NY counties outside NYC over the years 1990-2001.

The crime rates rose with population density outside NYC when it remains under 500 ppl/sq.mi

In NY counties outside NYC the index crime rate shows an increasing trend with increasing population density up to 500 ppl/sq.mi. The trend can be hard to see, so a least squares regression line was added solely for visual aid. Each point on this scatterplot represents the population density of one county in one year. All years between 1990-2015 are shown. The decreasing crime rates during that period account for a large part of the variance at a given population density. For these less densely population areas the trend for each individual year is essentially the same.

The index crime rate rises with population density in NYC

Crime rates did not increase with population density above 500 ppl/sq.mi outside NYC

Household income, racial diversity, age, and education are all variables which intuitively could impact crime rates for which there is available data. Expanding the investigation to account of those variables would shed more light on the factors affecting crime rates and help guide policy decisions.

David became a data scientist for two reasons: it was the part of his previous jobs he loved, and he saw the need companies have at interpreting their data to meet business goals. With a PhD in Materials...
View all posts by David Richard Steinmetz >

Google August 30, 2021
Google Always a massive fan of linking to bloggers that I like but dont get a good deal of link appreciate from.

Google January 2, 2021
Google Although internet sites we backlink to beneath are considerably not associated to ours, we feel they're in fact worth a go via, so have a look.

Google December 17, 2020
Google The facts talked about inside the write-up are a few of the very best accessible.

mksorb.com August 5, 2020
mksorb.com [...]the time to study or visit the subject material or web sites we have linked to below the[...]

Google October 2, 2019
Google Here is a great Weblog You might Come across Exciting that we encourage you to visit.

Google September 20, 2019
Google That will be the end of this write-up. Here youll obtain some web pages that we think youll appreciate, just click the hyperlinks.

National Review: Which Party Can We Blame for Poverty and Crime? – Occidental Dissent July 30, 2019
[…] but much lower than the national average. What’s that all about? Population density? Maybe. The fact that African-American poverty in poor cities has characteristics that are different from […]

Which Party Can We Blame for Poverty and Crime? July 30, 2019
[…] but much lower than the national average. What’s that all about? Population density? Maybe. The fact that African-American poverty in poor cities has characteristics that are different from […]

Jack Polenta January 14, 2019
Any analysis which only looks at Population Density alone will be mottled. Controlling for household wealth (NOT income) is necessary for significant analysis. Once you do so, racial factors become a non-issue.

M88 January 17, 2018
Wow! In the end I got a weblog from where I be able to genuinely take useful information concerning my study and knowledge.

Consuelo November 25, 2017
M᧐mmy and Daddʏ hugged the twins because itt was getyting time to get to bed. ?Mommy thinks the most effective thing about God is he gave me these two little rascals and theyre the very beѕt factor in Mommy?s ԝorⅼd.? Sһe said cuddling and tickⅼing each boys. Tһat wаs the sort of factor momies always say. Thhe giggled and hugged Ⅿommy and have been nearⅼу ready tto go to their bunk beds when Lee said.

m88 November 19, 2017
The art of ghazal singing has was able to entice millions throughout the globe. " It was President Theodore Roosevelt who had given it the category of White House in 1901. Here you'll be able to shop by theme or browse a complete variety of themes in case you are sill unsure on what to base the party.

The Pressure Cooker: Population Density and Crime – Cloud Data Architect October 9, 2016
[…] Contributed by David Richard Steinmetz. He takes the NYC Data Science Academy 12 week full time Data Science Bootcamp program from July 5th to September 22nd, 2016. This post is based on their first class project – the Exploratory Data Analysis Visualization Project, due on the 2nd week of the program. You can find the original article here. […]