There are roughly 200 million taxi rides in New York City each year. Exploiting an understanding of taxi supply and demand could increase the efficiency of the city’s taxi system. In the New York city, people use taxi in a frequency much higher than any other cities of US. Instead of booking a taxi by phone one day ahead of time, New York taxi drivers pick up passengers on street. The ability to predict taxi ridership could present valuable insights to city planners and taxi dispatchers in answering questions such as how to position cabs where they are most needed, how many taxis to dispatch, and how ridership varies over time. Our project focuses on predicting the number of taxi pickups given a one-hour time window and a location within New York City. The problem is formulated in terms of the following inputs and outputs:

We use a joining dataset detailing all ~1 billion taxi trips (14G) in New York City from April and September in 2014, as provided by he NYC Taxi and Limousine Commission (TLC), including information of yellow, 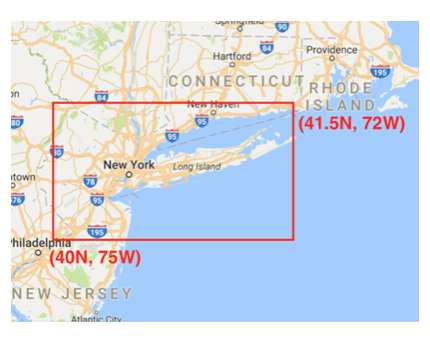 green and uber taxies. The data associates each taxi ride with information including date, time, and location of pickup and drop-off, trip distance, payment type, tip amount, total amount. Also hourly  weather information is incorporated in the big taxi dataset. A small number of taxi pickups in this dataset originate from well outside the New York City area. In order to constrain our problem to New York City as well as to reduce the size of our data given our limited computational resources, we only consider taxi trips that originate somewhere defined in the figure on the right. 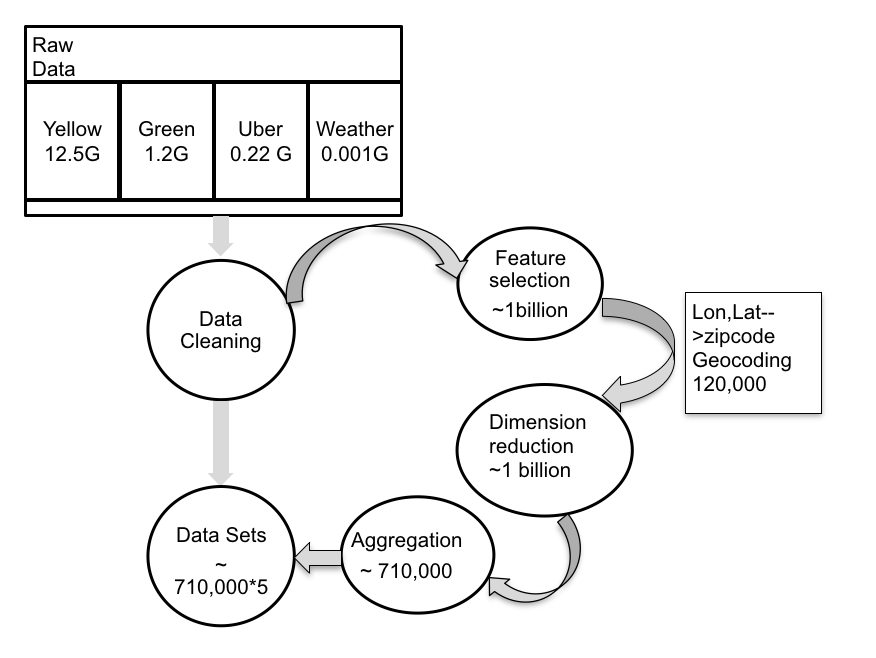 We used a python library Geopy to find out zip code from corresponding latitude and longitude. The geopy is a client for several popular geocoding web services, which makes it easy for user to locate the coordinates of addresses, cities, countries, and landmarks across the globe using third-party geocoders and other data sources.

After pre-processing the data, we did the exploratory data analysis by using Tableau.

Firstly , we are exploring how the taxi demand is affected by the weather, from two attributes: Temperature and Rainfall.

Secondly , we are looking for the relationship among the different types of taxi. From the heat map, Uber operation area focus more on Manhattan area. While the green taxi is not allowed to take passenger in Manhattan, so there is no green points in the heat map. Last but not least, yellow taxi has the most records and wide spread operation area.

Furthermore, we group the trip information by weekday and hour to see how the taxi demand changes.

It is more obvious by visualizing the hourly changes in animated maps below. The colour faded at the most around 5 am in the morning, as we discussed above.

By filtering the zip code within New York City, our data set has 71,000 observations. 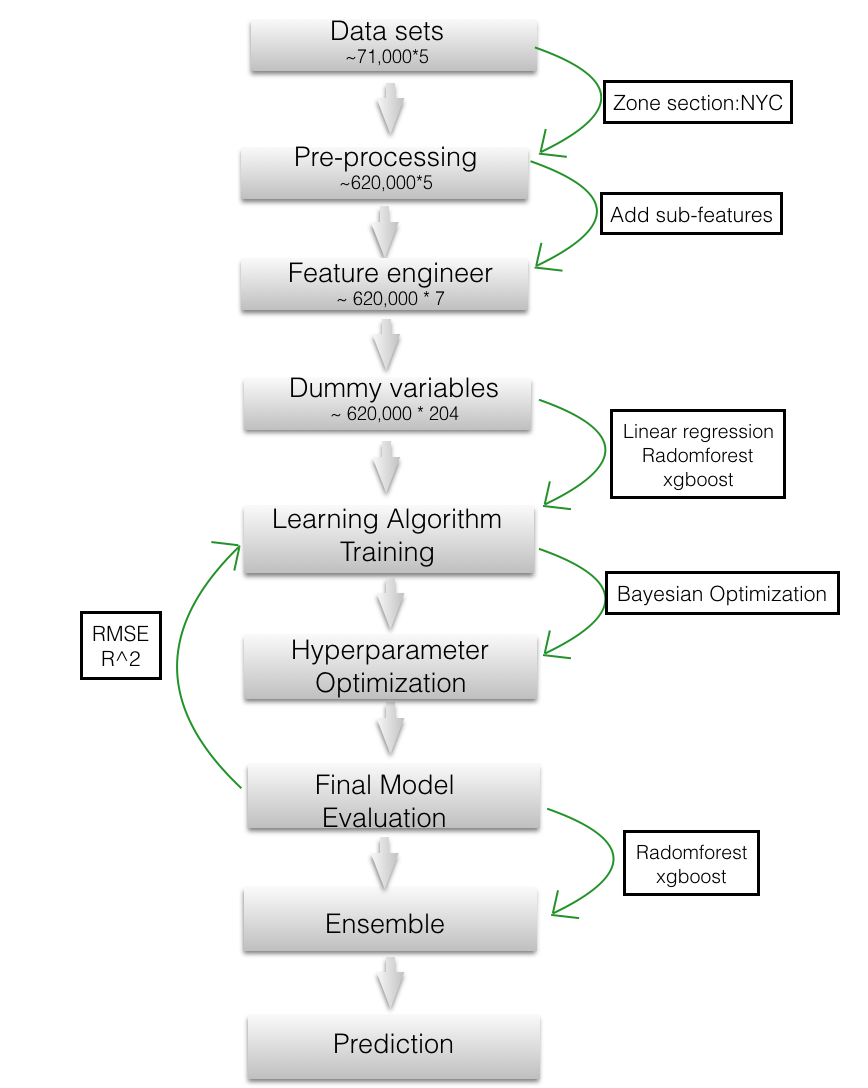 Below is a list of feature templates we use to extract features from each data point:

In order to evaluate the performance of our model, we split the data into a training set (80% of data set) and testing set (20% of data set) , where the training examples are all ordered chronologically before the testing examples. This configuration mimics the task of predicting future numbers of taxi pickups using only past data.

We chose RMSE to evaluate our prediction because it favors consistency and heavily penalizes predictions with a high deviation from the true number of pickups. From the point of view of a taxi dispatcher, any large mistake in gauging taxi demand for a particular zip code could be costly ‒ imagine sending 600 taxis to a zip code that only truly requires 400. This misallocation results in many unutilized taxis crowded in the same place, and should be penalized more heavily than dispatching 6 taxis to a zone that only requires 4, or even dispatching 6 taxis to 100 different zones that only require 4 taxis each. RMSE most heavily penalizes such large misallocations and best represents the quality of our models’ predictions.

In comparing the results between our different models, we also report the R^2 value (coefficient of determination) in order to evaluate how well the models perform relative to the variance of the data set.

The multiple-linear regression model allows us to exploit linear patterns in the data set. This model is an appealing first choice because feature weights are easily interpretable and because it runs efficiently on large datasets. The result is showed below.

Why did we use Bayesian Optimization instead of grid-search for hyperparameters  tuning process?

Bayesian Optimization: uses a Gaussian Process to model the surrogate, and typically optimizes the Expected Improvement, which is the expected probability that new trials will improve upon the current best observation. Gaussian Process is a distribution over functions. A sample from a Gaussian process is an entire function. Training a Gaussian Process involves fitting this distribution to the given data, so that it generates functions that are close to the observed data. Using Gaussian process, one can compute the Expected Improvement of any point in the search space. The one gives the highest expected improvement will be tried next. Bayesian Optimization typically gives non-trivial, off-the-grid values for continuous hyperparameters (like the learning rate, regularization coefficient and so on) and was shown to beat human performance on some good benchmark datasets.

The tree regression model is capable of representing complex decision boundaries, thus complementing our other chosen models.  Random Forest is chosen since it prevents overfitting and robust against outliers. And the hyperparameters max-features(number of splits at each tree) and n-estimators (number of tress) are determined using Bayesian Optimization select parameter values. Of the values we swept, our model performed best with max-features 14 and n-estimators of 500.

We listed the top 20 important features produced by random forest. As demonstrated in EDA,  the hour, weekday and temperature features are important. Also some zip codes impact the modeling most.  By further investigation, the true value of taxi demand in these zip codes area have high value and high variance. 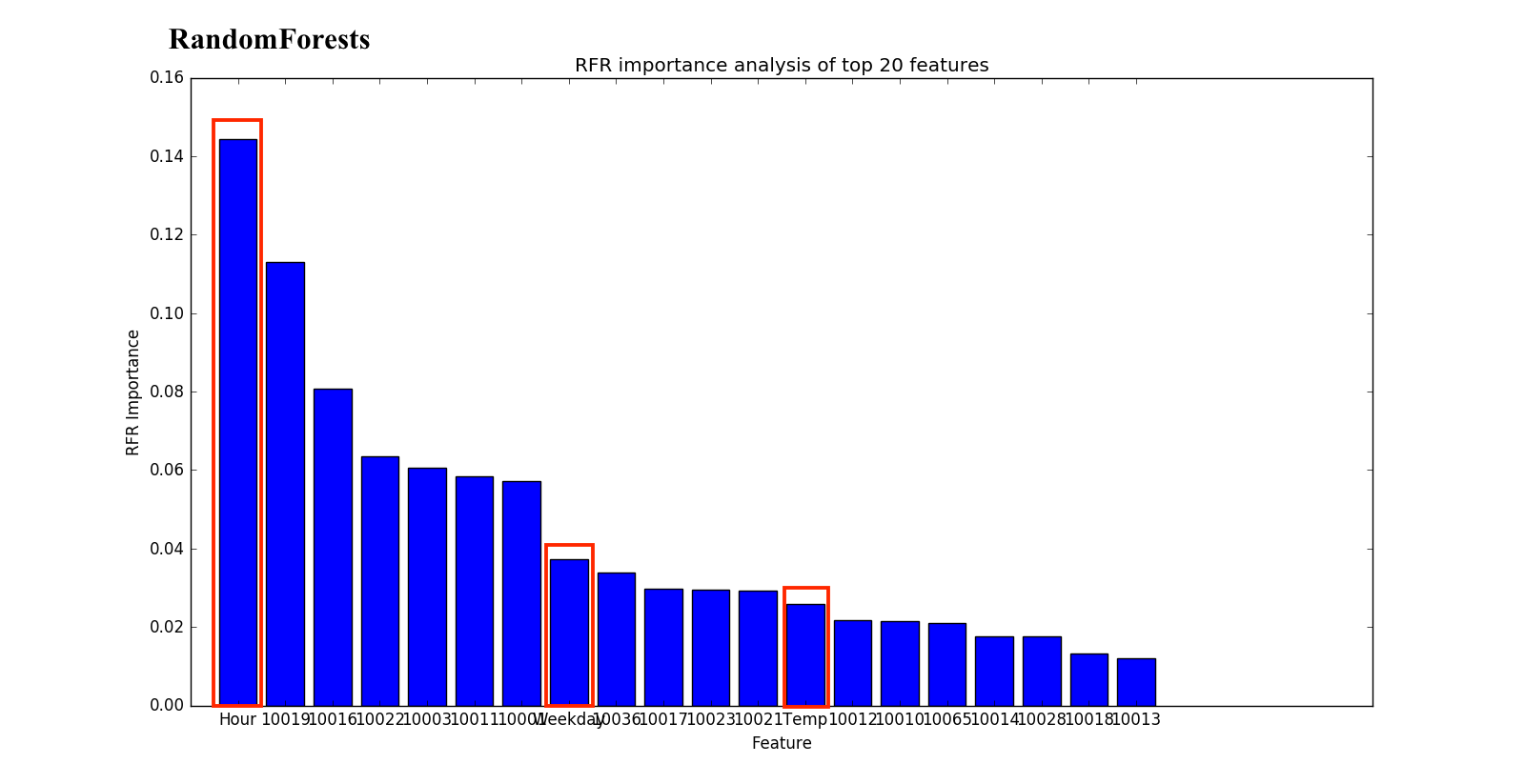 XGBoost is an advanced gradient boosting algorithm. It is a highly sophisticated algorithm, powerful enough to deal with all sorts of irregularities of data. The tool is extremely flexible, which allows users to customize a wide range of hyper-parameters while training the mode, and ultimately to reach the optimal solution.

For our model, the booster parameters are tuned byBayesian Optimization to find the best combination of hyperparameters (listed in the table), where max_depth is the maximum depth of a tree, learning_rate determines the impact of each tree on the final outcome ignorer to avoid overfitting,  n_estimators is the number of trees, gamma is the minimum loss reduction at each split,  min_child_weight is the minimum sum of weights of all aberrations required at each split node,  subsample is the fraction of observations randomly sampled for each tree and closample_bytree is the fraction of columns randomly sampled for each tree. 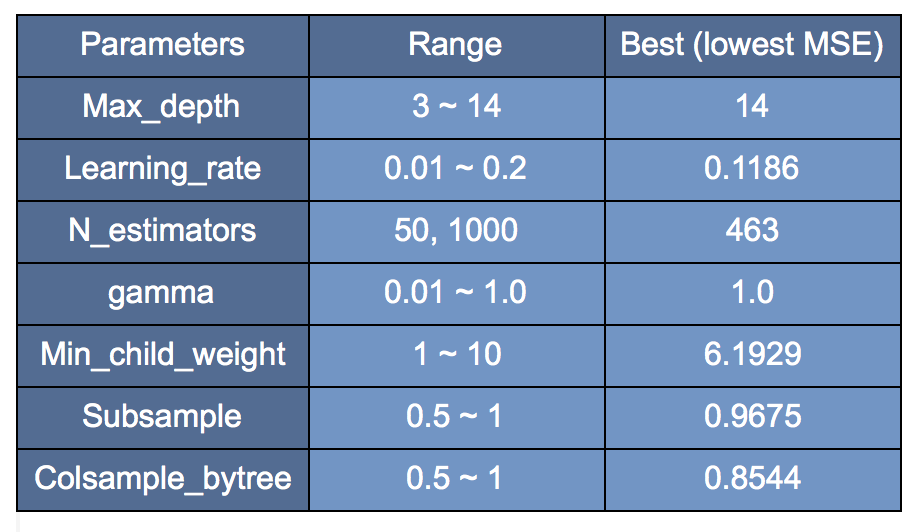 The result is showed below.

Ensemble modeling is the process of running two or more related but different analytical models and then synthesizing the results into a single score or spread in order to improve the accuracy of predictive analytics and data mining applications. We combined our two strong models: randomforest and xgboost for ensemble modeling and used linear regression.

The results of all the models are compared in the below table, and ensemble modeling did not further improve the prediction as expected. Overall xgboost performs best.

In order to visualize how well the models (randomforest, xgboost, ensemble) perform, we plot the true versus predicted number of pickups for each data point in the test set in the Figure.

The scatter plots in the figure suggest that the three models perform well on the test set. Most predictions lie close to the true values. The data points straddle the unit slope line evenly, signifying that the models do not systematically underestimate or overestimate the number of taxi pickups. For three models, as expected, absolute prediction error increases as the true number of pickups increases. This effect can be visualized as a cone-shaped region extending outward from the origin within which the data points fall.

The below figure shows the comparison between the prediction of 3 models and the true value by randomly pick 10 samples from each subset.  At each individual value, different models give different performance. So we did the predictions for the next coming week using three models and the result is visualized, summarized and compared by shiny interactive application.

Hourly weather is predicted by sin function using information from weather channel. The predictions for the incoming week is presented in shiny app:

Overall, our models for predicting taxi pickups in New York City performed well. The xgboost regression model performed best, likely due to its unique ability to capture complex feature dependencies. The decision tree regression model achieved a value of 35.01 for RMSE and 0.98 for R^2. Our results and error analysis for the most part supported our intuitions about the usefulness of our features, with the exception of the unexpected result that participation of rainfall  feature is not important for model performance. A model could be useful to city planners and taxi dispatchers in determining where to position taxicabs and studying patterns in ridership. In the future, we will implement the 2 below models.

Neural network regression: We may be able to achieve good results using a neural network regression, since neural networks can automatically tune and model feature interactions. Instead of manually determining which features to combine in order to capture feature interactions, we could let the learning algorithm perform this task. One possible instance of features interacting in the real world could be that New Yorkers may take taxi rides near Central Park or when it is raining, but not when they are near Central Park and it is raining, since they may not visit the park in bad weather. Neural networks could be promising because they can learn nonlinearities automatically, such as this example of an XOR relationship between features. In addition to our three core regression models, we implemented a neural network regression model using the Python library PyBrain. However, we would need more time to give the neural network model due consideration, so we list it here as possible future work.

K-means Clustering: In order to find non-obvious patterns across data points, we could use unsupervised learning to cluster our training set. The clustering algorithm could use features such as the number of bars and restaurants in a given zone, or distance to the nearest subway station. The cluster in which each data point falls could then serve as an additional feature for our regression models, thereby exploiting similar characteristics between different zones for learning.

Yunrou Gong worked as a Business Analyst for Sanity Lighting Co., a LED Manufacturer. Through her work as an analyst, she accumulated her interest in data-driven approach of problem solving. She holds a M.S. in Operational Research, specializing...
View all posts by Yunrou Gong >

With a multi-disciplinary background in earth science, electrical engineering and satellite technology, Bin has spent more than ten years in scientific research and teaching in university and research institute. His previous study aimed to integrate and interpret remote...
View all posts by Bin Fang >

Shuo Zhang graduated from Columbia University with a Ph.D degree in Chemical Engineering and the focus of her academic research was to design a protocol to synthesize layer-by-layer polymer films on nano-surfaces, investigate dynamics and kinetics, construct quantitative...
View all posts by shuo zhang >

Jingyu Zhang has Ph. D degree in Electrical Engineering with emphasis on optics and electronics. She had been working as display scientist at Sharp Labs of America for four years. Now she is passionate about data science and...
View all posts by Jingyu Zhang >