This Kaggle Competition offered a comprehensive dataset of nearly 4000 home sales in Ames, Iowa between 2006 and 2010 with the various features influencing the sale prices. Our motivation was to explore and analyze the housing dataset to find the key features that influenced the sales price and then develop a machine learning algorithm to predict the prices.

Upon observing the data, our team wanted to create a systematic method to understand the variables before building any sort of model. We sorted through a sample of the data set which included 79 explanatory variables and the corresponding sale price for each home. Our team explored the different data types within the data, which were divided into 38 numerical features and 43 categorical features.

To predict the housing prices, our team explored the variables to evaluate the key features that affect housing prices in Ames, Iowa. We then wanted to understand redundancies, collinearity, and the relationships between different variables. 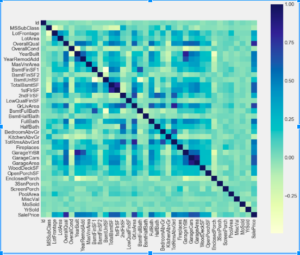 Our team also wanted to remove information that did not seem relevant or useful. If a variable was missing more than 50% of its data, we removed those columns from our dataset. The graph below is a visual representation of the missing data. 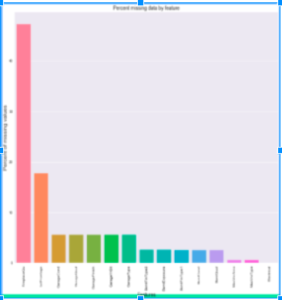 Generally speaking, outliers are observations that appear to deviate outside the overall pattern. Also, extreme outliers could dramatically impact the results of a prediction model. We conservatively removed two outliers, which were homes with sale prices over $300,000 and had less than 4,000 square feet of living area. After the outliers were removed, the graphs depicted a more linear relationship between sale price and square footage. 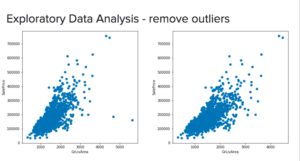 There were certain numeric variables that actually described categorical features. In the graph below we illustrate this was the case with the month sold. While sales varied by month, there was no numerical pattern represented by the month of the sale. 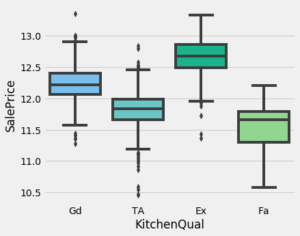 Skewed distributions can decrease the accuracy of a model’s predictions because it could reduce the impact of low frequency values which could be equally significant when represented by normally distributed data. As shown in the graphs below, we used a log transformation to normalize the Sales Price. Other skewed features, such as Lot Area, were also adjusted in the same manner. 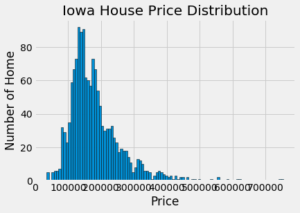 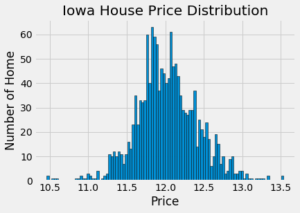 After cleaning and transforming our data, we explored various machine learning algorithms to predict sales prices. To investigate benefits of dimension reduction and look for strong patterns in the dataset, we also evaluated the models with and without Principal Component Analysis. The various machine learning algorithms were optimized with a parameter grid search and used K-Fold cross validation to prevent overfitting. The two paths used in developing our models are shown below.

We tested these models with and without Principal Component Analysis (PCA).  After cleaning our data, performing EDA, and creating dummy variables for the categorical features, there were over 318 features in the model. 85 Principal Components accounted for 90% of the variance in our data. PCA allowed for us to reduce variation and illustrate strong patterns. 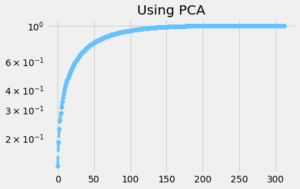 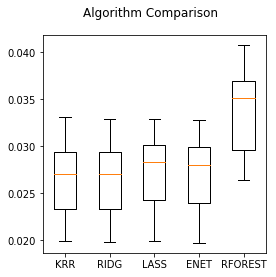 Unfortunately for our models, PCA has its limitations since it relies on linear assumptions. Although PCA does a great job with data that is linearly correlated, PCA might not capture the full picture if there are nonlinearities.

Our team also ran the models without PCA and as depicted in the graph below. These results indicate models using  Ridge, Lasso, ElasticNet, and Random Forest perform better without PCA best in predicting housing prices with a Root-Mean Square Error of approximately 0.024 - 0.029. 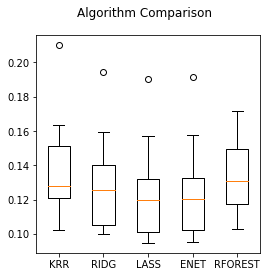 Finally, once we optimized our models based on the training data, we ran the Kaggle test set through the algorithms to predict the sale price. Overall, the ridge model provided the most accurate predictions.

From this project, we gained several key insights and ideas for improving the model in the future. While implementing PCA in the model did not always provide improved predictions, it may have improved results if we are able to identify any nonlinear relationships within our data set. We believe the grid search to optimize the input parameters of each model improved the accuracy and could be further improved with additional tuning among a broader range of parameters.

Additional regression models could also be implemented into the algorithm to optimize results as well as model stacking or ensembling techniques to incorporate several models into the prediction. Other considerations may include investigating other data that could influence the prices, such as how long the home was on the market and whether it has a desirable layout. It would also be interesting to see how these models perform based on home sales outside the dataset, for years after 2010.

Demonstrated passion for learning and developing solutions to complex business problems. Skilled in Sales, Business Development, Finance, Alternative Investments, and Equities. Strong analytical professional with a Bachelor’s Degree in Applied Mathematics from Columbia University in the City of...
View all posts by Ariani Herrera >

As an engineer with a strong background in R&D and acoustics, Erin enjoys finding creative ways to interpret and communicate complex information, whether it's for product development or project design. She holds a Master of Engineering Management (MEM)...
View all posts by Erin Dugan >

View all posts by won kang >

View all posts by Johnnie >