Examining price elasticity of demand with an online experiment

Internet marketplaces offer marketers the ability to track the shopping decisions of consumers on an individual level.c. This project examines the economic implications of a price increase for an unnamed "leisure and fun" activity pricing experiment with approximately 225,000 observations run online by a company during Q2 2017 and presented at kaggle.com/shariqhhashmi/pricing-point

Our goal is to recommend methods to this company's management and marketing teams in order to maximize the revenue and gross profit for the service. To this end, we investigate the effect of pricing on economic outcomes such as revenue. We also examine the effect of price and other factors on purchasing decisions observed during this experiment to examine potential further pricing flexibility.

Description of the experiment

The primary dependent variable was the number of bookings (or purchases) of the activity.  We normalized that to a percentage because the experiment changed the activity price from $199 to $299 a third of the time. The experiment examined only those  two price points The ratios of observations of the two prices were approximately evenly distributed across the day of the week, referral source (e.g Facebook or Google), platform (e.g. mobile or desktop) and visitor IP address state (e.g. New York) as illustrated in the figures below.  Nominally the price was an independent continuous variable, though only two levels were explored in the experiment.  The visits were centered around a single quarter, so we did not include the month in our analysis.

Economic Analysis of the Pricing Experiment

Price elasticity of demand is the degree to which demand for a product changes with its price. Understanding this relationship allows the producer/marketer to adjust the price to maximize revenue.

Recall the number of visits with a $299 price was approximately half the number as it was for $199, so we standardized the number of bookings per 100 visits at a given price. We observe in the figure below that, as expected by economic models for products with negative price elasticity, the number of bookings drops as the price increases by an average of 22% across all factors, which we found to be statistically significant. The variation in this drop with respect to source, device, state and day of the week is examined in the "Purchasing Decision Factors" section of this analysis. 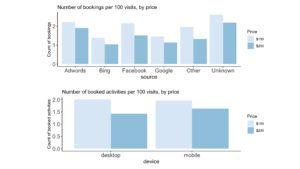 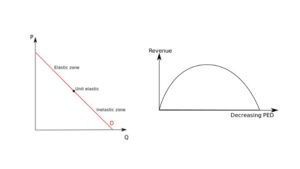 The figure below demonstrates an average 17% increase in standardized revenue across all factors. Because the increase in revenue was generated by an increase in price, gross profit should also increase, assuming unit costs do not increase proportionally with price as a function of decreased unit quantities. 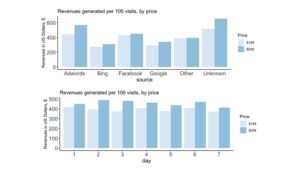 Recap of prior observations in economic analysis

We recall from the introduction that the total number of site visits by day of the week, referral source, state and device type.  These visits represent a current addressable market by each factor, to help with prioritization. 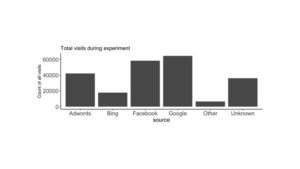 Influence of factors on the decision to book the activity

As we saw in the analysis of demand in the economic analysis, the level of demand varied within parameters, such as between a referral from Bing or Google Adwords. We observed that Google Adwords (now Google Ads), Facebook and Unknown all have higher percentages of booked trips per visit. The Unknown category warrants deeper investigation to determine their source since the booking percentage was relatively, and there also were a relatively large number of visits from those unknown sites. Also of interest, Google Adwords and Unknown had $299 booking percentages around 2%, indicating potentially greater price elasticity and higher potential revenues from users of those sites (known and unknown) that have a relatively larger number of referrals. We confirmed these observations with multi-proportion tests with the referral source as the categorical factor, achieving strong significance (p < 10-15) at both prices examined.

One of our goals was to develop a quantitative understanding of the relationship between the price of the activity and demand for it as measured by the booking percentages.

Because the activity price is nominally a continuous variable we wanted to quantify the change in demand as a function of a unit change in price, as characterized by price elasticity. In addition, observations of the changes in booking percentages as a function of price led us to hypothesize that the demand for the activity may have dropped less for Google Adwords visitors and for mobile users.

However, the original experiment was not designed to account for interactions which are confounded with the independent parameters. We limited the model to first-order effects for source and price. The model leaves much of variation unexplained as indicated by its high AIC value, but it confirms some prior observations. Both source and price are significant drivers of the likelihood to book, with the likelihood predicted to drop by 13% (770 basis points) lower for an increase of $100. However, a caveat here is that the experiment examined only two prices, which may mask nonlinearity in the response. The model also confirms the proportion test for source, with Google Adwords (not shown but implied) as the known high-traffic source with the highest likelihood of booking a trip, followed by Facebook, though the difference was not significant. The model predicts the likelihood of booking for a Facebook referral is 8% lower (450 basis points) at the $299 price, though that understates the effect seen experimentally. Notably, the Unknown sources trended with the highest likelihood of booking, thus confirming the importance of learning the sources of those referrals. Finally, because this was a linear model with no interactions, the device was no longer significant.

We recommend moving the price to $299 for the activity since this increased both revenue and gross profit with only a moderate decrease in quantity sold. We also recommend further experimentation to learn if there is still price elasticity at higher prices and therefore the potential for higher revenues and gross profits.

Additionally, we recommend the following actions with respect to marketing and advertising with referral sources

Doug Devens has a background in chemical engineering, with a doctorate in rheology of polymers. He has nearly 20 years of experience in medical device product development, with a dozen product launches. It is here he learned the...
View all posts by Doug Devens >