Detecting Health Insurance Fraud: Reducing Costs for Both the Insurers and the Insured

According to the Institute of Medicine, health insurance fraud is among the top 5 “Sources of Waste” in American Health Care spending (Shrank et al., 2019). A study published in the International Journal of Academic Medicine showed that the cost of litigation and risk management is a significant expenditure associated with Health Care Fraud, often exceeding the direct costs of fraudulent claims (Dippolito et al., 2016). The high cost of litigation can deter health insurance companies from suing potentially fraudulent providers, especially because the direct cost of fraudulent claims can be transferred to the insured in the form of higher premiums. Many insurers would be more confident about pursuing litigation if they could be assured that the case is truly fraudulent, leading to overall net savings rather than losses. Net savings would benefit both the insurer and the insured as they would, ultimately, enable insurers to set health care premiums that are more competitive in the marketplace.

The data consisted of four separate datasets below. To get the full details of each provider, these datasets were combined into one.

Considering fraud was present in only 9% of all providers in the given dataset, a skewness towards non-fraudulent providers influenced model and metric selection to avoid errors caused by imbalance classification. To mitigate the effects of imbalance classification, we used a variety of methods: adjusting the class weights for select models, stratifying the data during train test split, and evaluating other metrics beyond just ROC AUC. 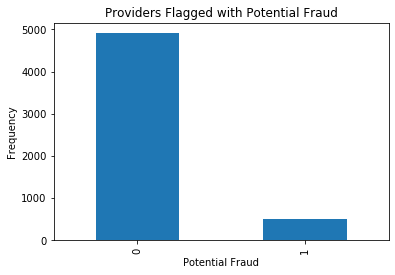 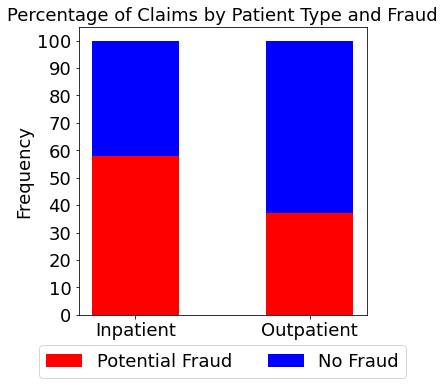 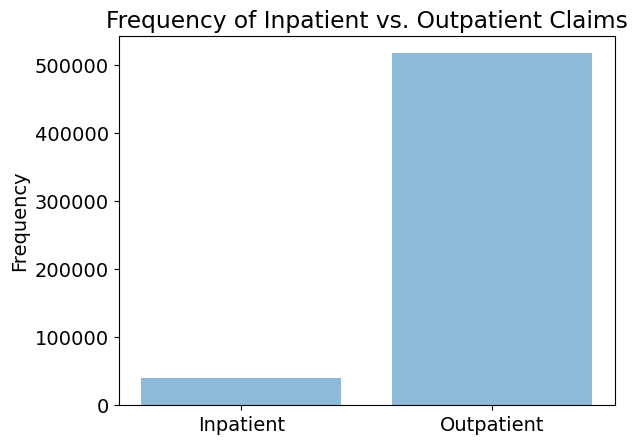 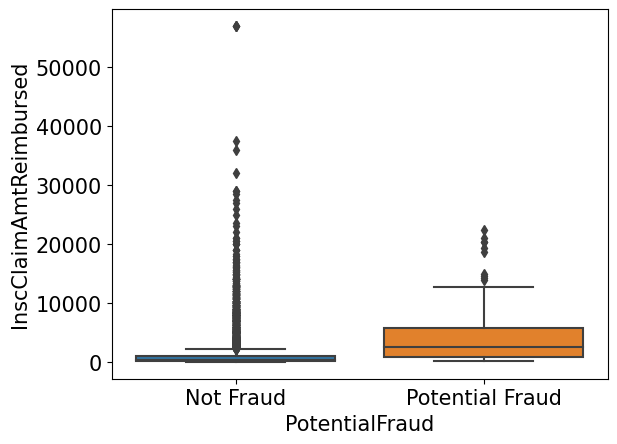 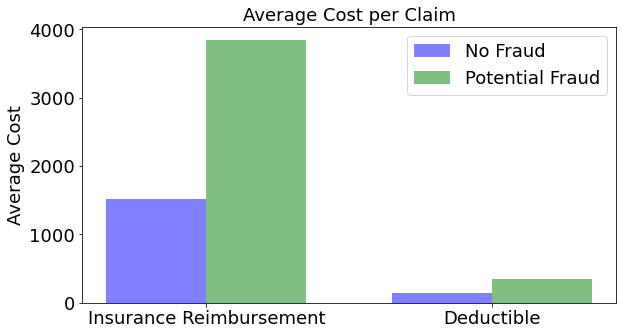 Association rule mining was applied to claim diagnosis codes, physicians, and chronic conditions. Among the claim diagnosis codes and physician, only values that made up more than 1% and 0.2% of all values, respectively, were used. With a low minimum support, no insightful features were found. However, with a slightly higher minimum support among chronic conditions, an association between heart failure and ischemic heart was discovered. Since this association is intuitive, no new features were created based on association rule mining.

Likewise, latent Dirichlet allocation (LDA) confirmed the results from association rule mining. Applying LDA to the chronic conditions, diagnosis codes and procedure codes, revealed that there were no differences in allocation between two topics, fraudulent and non-fraudulent.

Social Network Analyses revealed that the number of patients and the number of attending physicians associated with each provider is higher for potentially fraudulent providers than for non-fraudulent providers. In the figures below, each node represents either a provider, a patient, or an attending physician. Each line or “edge” represents a connection, either from patient to provider (Figure 1), or from physician to provider (Figure 2). The larger the node, the greater the number of connections to that node.

Figure 1: Patients per Provider: Number of patients associated with each provider is higher for potentially fraudulent providers 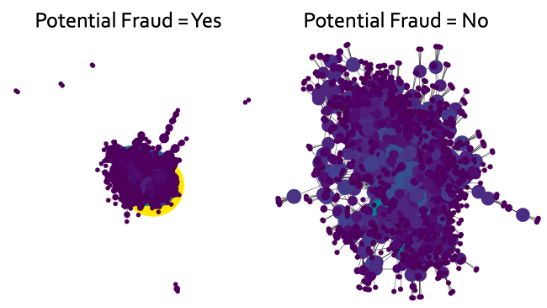 Figure 2: Physicians per provider: Number of physicians associated with each provider is higher for potentially fraudulent providers 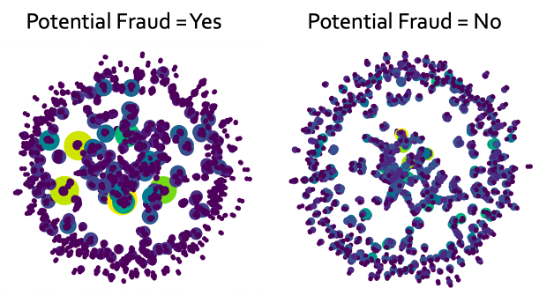 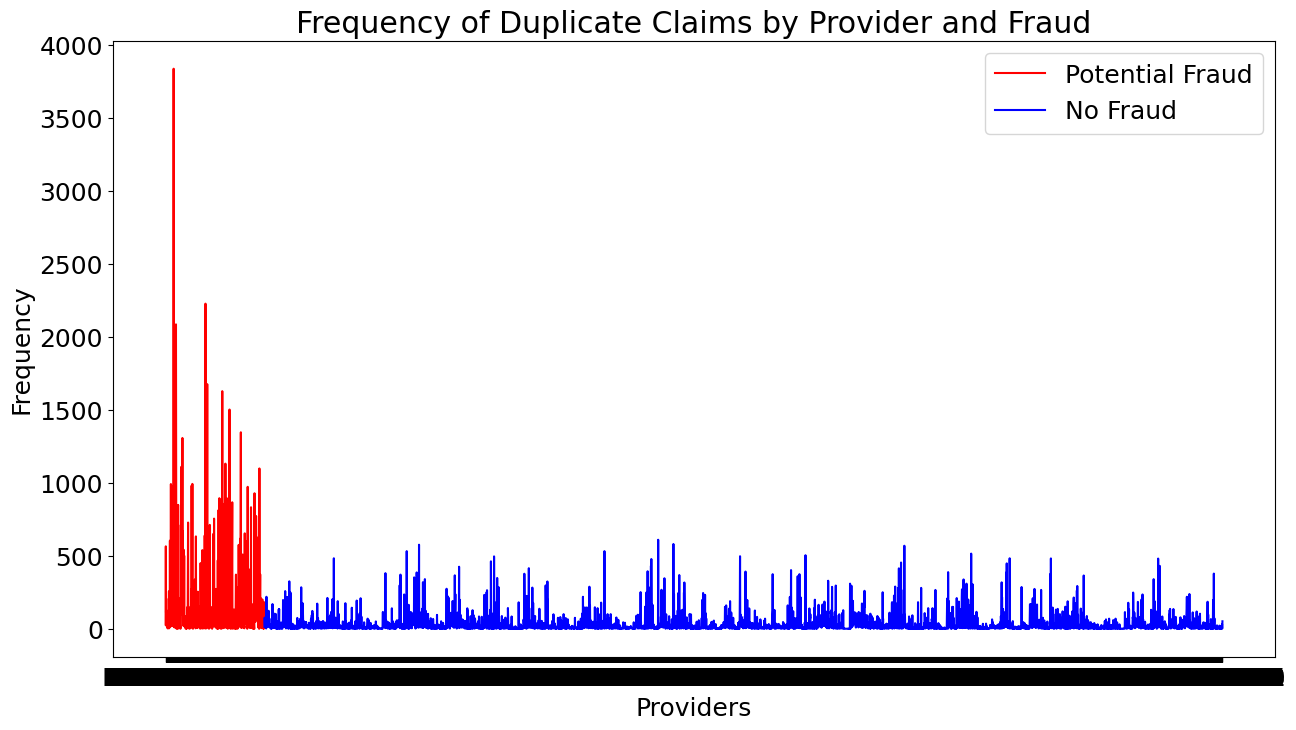 In summary, the table below includes the new features that were added to the models. As a result of these new features, several features from the original dataset were dropped, including those with large missing values. The final dataset was grouped by provider. 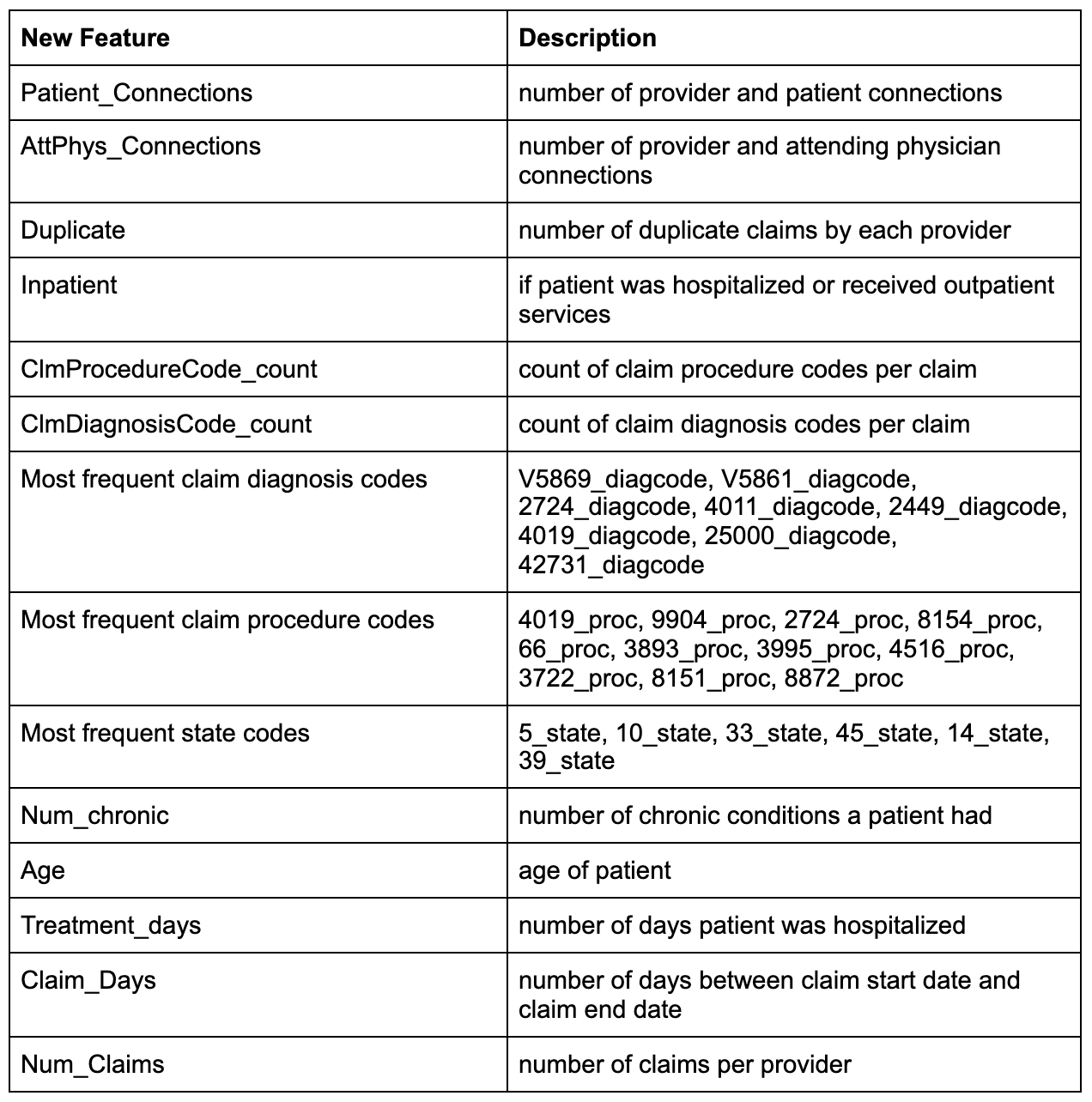 To identify cost-sensitive algorithms that will maximize true positives, metric scores of linear, nonlinear, and ensemble models were compared using k-fold cross validation. Macro scores were initially evaluated to take the average calculation of each class and to remove the influence of imbalance classes. The F1 macro scores among all models were slightly similar, at around 0.75. However, without compromising recall macro scores, the models that were ultimately chosen for further hyperparameter tuning via GridSearch include Logistic Regression (linear), Random Forest (ensemble), and Gradient Boosting (ensemble). A voting ensemble using these three models was evaluated further to determine if the model would improve. 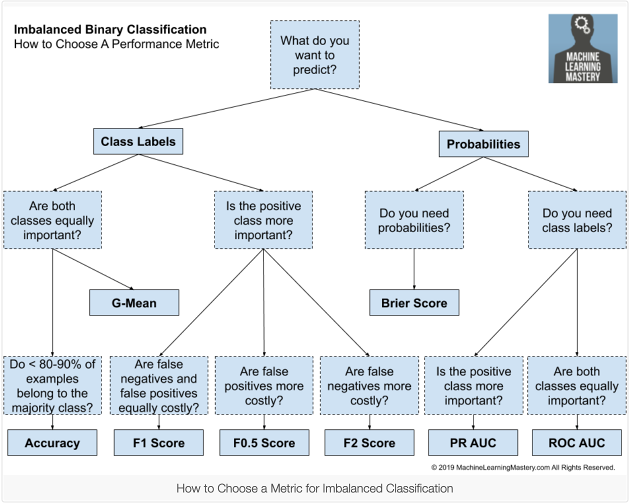 Due to the imbalanced classification nature of our data, with the positive class being more important and false positives more costly, we rely on F0.5 and precision as our performance metrics 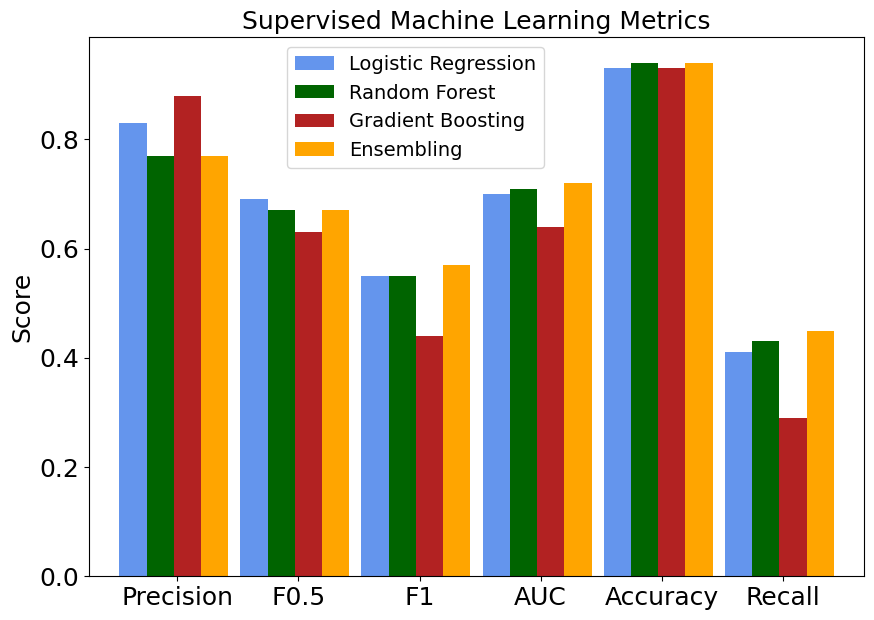 Since our goal is to optimize precision and F0.5, logistic regression gave us the best overall scores and the next best model is voting ensemble. Although gradient boosting gave us the highest precision score, other metrics suffered, as indicated by the lowest F0.5 score and a F1 score of less than 0.5.

To approximate the cost of False Positive (FP), the potential cost of litigation, we used a survey conducted by The U.S. Chamber Institute for Legal Reform, Litigation Cost Survey of Major Companies, which included some health insurance companies. The survey revealed that the average cost of legal fees per case completed in court can cost a minimum of $350k and an average of $2 mil. And a separate discovery fee that can cost a minimum of $100k. Discovery is the pre-trial phase in a lawsuit in which each party investigates the facts of a case through the rules of civil procedure by obtaining evidence from the opposing party. Cases tend to settle during the discovery period. We assumed the cost of each FP to be $100k as a conservative estimate. As you recall, the average insurance reimbursement of a fraudulent claim is $3800, so at minimum, a False Negative (FN) is a loss of $3800 per claim. Conversely,  a True Positive (TP) that correctly identifies a fraudulent case represents a cost saving of $3800 per claim. 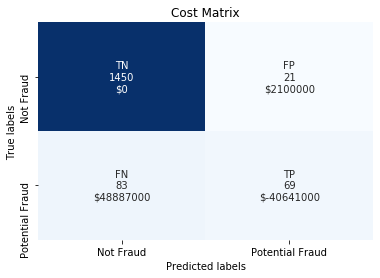 Because the cost of FP or litigation is so high, it appears that it would not be worth it to sue. However, $3800 is the cost for one claim. We found that the median number of claims made by a provider flagged as potential fraudulent was 155, and the average was 420. When that many claims are involved, litigation may indeed be worthwhile. With the assumption that each fraudulent provider made 155 claims, our logistic regression model would ensure the insurer a savings of $40,520,000 for correctly identifying 68 TP with a precision of 83%. 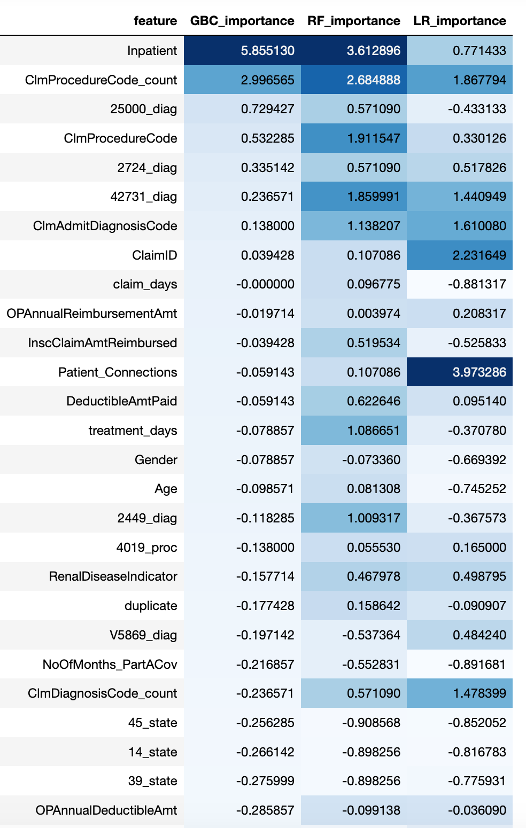 Based on the logistic regression model, which maximized the probability of detecting a truly fraudulent provider, the following features are important for predicting fraud:

Using an algorithm that includes social network analysis, engineering of new features such as duplicate claims, and a logistic regression model for classification, insurance companies can be confident that approximately 83% of the cases they pursue in court will result in “True Fraud” outcomes.

By applying the cost matrix analysis above, we can see that this algorithm will save private insurers tens of millions of dollars. These savings will ultimately benefit the insured and will enable private insurers to remain competitive in the marketplace.

To estimate the cost of FP or cost litigation, we made some assumptions according to the Litigation Cost Survey of Major Companies. To determine the costs of FP more accurately, we need to obtain additional information regarding litigation expenses to better estimate the cost matrix. With more time, we would like to develop an interactive dashboard in which users can input claim and provider information and obtain a prediction regarding potential fraud.

Kristin has a Masters in Business Administration with a concentration in Business Analytics from California State University, Fullerton and a Bachelor's in Biological Science from University of California, Irvine. She is excited to combine previous business domain knowledge...
View all posts by Kristin Teves >

As a social science researcher with a PhD in cognitive psychology, Sara has been applying data science skills (including hypothesis testing, statistics, machine learning, and natural language processing) to program evaluation and behavioral science in ways that enhance...
View all posts by Sara Kien >